The Centre for Deliberative Democracy and Global Governance at the University of Canberra is convening the first Global Citizens’ Assembly on Genome Editing. The aim of the citizens’ assembly is to bring together one hundred participants from different countries for a five-day deliberation on the global governance of genome editing. Over the course of the five-day deliberation, participants will be able to ask leading researchers, ethicists, and genome editing stakeholders questions to support their discussions. 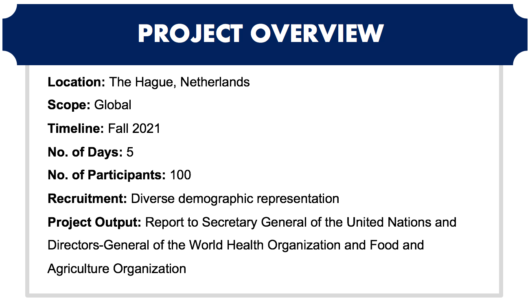 The recommendations from the global citizens’ assembly will be shared with the Secretary General of the United Nations and the Directors General of the World Health Organization and Food and Agriculture Organization. Recommendations from both the national and global deliberations will also be shared with relevant national and local-level government officials, as well as stakeholders from the research and industry communities.

Genepool Productions—an Emmy-award winning production company—will be filming the citizens assemblies as part of their documentary on genome editing. Capturing the excitement intensity of the global and national deliberations, the resulting “deliberative documentary” will be screened in multiple countries, further sparking conversation about the complexities of genome editing.