Participatory technology assessment is a powerful tool for bringing public perspectives to bear on critical science and technology decisions.

In collaboration with other members of the ECAST network, CSPO developed the ECAST pTA method. Designed as a reflexive, adaptable, and scalable model, the ECAST pTA method consists of three participatory phases: 1) Problem Framing; 2) ECAST Deliberations; and 3) Results and Integration. Projects typically span between 18 months and 3 years depending on their scale.

The three phases, briefly described below, change slightly depending on each project’s unique technical, social, and political contexts. Further, this method is intended as a “living” method. We developed the ECAST model over the course of a decade of project work and intend to continue developing it in light of evolving academic theories and changing policy contexts. 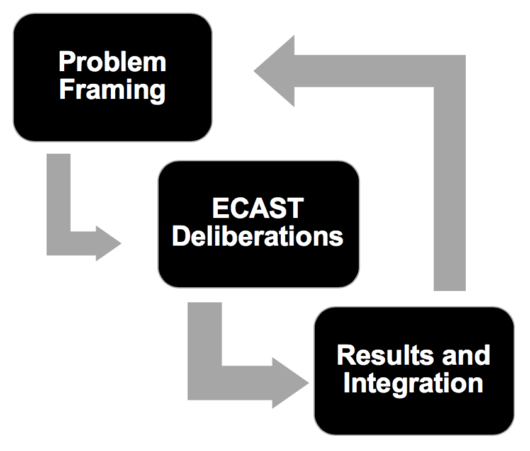 We use two participatory activities to construct a balanced issue framing. We recognize that public concerns may not always align with those of experts and that an expert-designed series of questions can miss latent areas of public concern. We thus begin our issue-framing process through use of open-framing focus groups. During these focus groups, we provide 10-15 recruited members of the public with minimal background information and ask them about their hopes and concerns regarding an issue. We then combine these public perspectives with expert framings extracted from a review of the academic literature and elicitation of expert and stakeholder perspectives during a stakeholder design workshop.

Diverse: We recruit participants using online and traditional methods of recruitment. We do not make any claims of, nor do we prioritize, statistical representation. While census data guide our recruitment, we ultimately strive for diversity, bringing together a critical mass of diverse demographic groups to represent a cross-section of the population of the city or state in which the deliberation takes place.

Interactive: We design the deliberations in collaboration with science museums to make sure they are accessible and engaging. In addition to discussions, groups review “stakeholder cards” and complete group activities.

General format: Participants sit at tables with 6-8 other individuals and a trained facilitator who guides them through the day’s discussions. The deliberation day is broken up into multiple thematic sessions. The general format for a session is: 1) watch a short briefing video, 2) engage in a table discussion regarding the session topic, and 3) complete a group activity and individual worksheet.

Local sessions: When hosting deliberations in multiple locations, all but one of the thematic sessions is the same for the different locations to allow for cross-site comparison. This exception is a local session that is unique to each site. These local sessions are designed in collaboration with, and explore issues of interest to, local stakeholders. 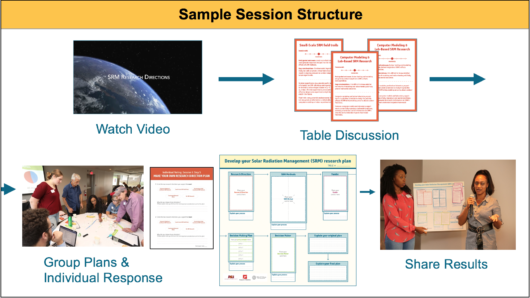 We collect both quantitative and qualitative data regarding public values and rationales.

We analyze these data using traditional methods of open and thematic coding. We also conduct basic quantitative analysis, calculating means and distributions, as well as two-sample t-tests (or ANOVA analysis) to compare means between sites. We do not use these analyses to make any statistical extrapolations from our participant groups to the population at large. Our statistical work is only to make sense of the data generated by the deliberations and to provide a general sense of the effectiveness of the forum.

Since we collect more data than we can analyze in their entirety, we host a preliminary results workshop to solicit expert and stakeholder input on areas for deeper analysis. This process helps to ensure the outputs of our deliberations are useful to policy and decision makers. 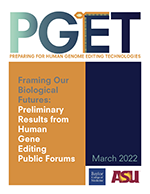 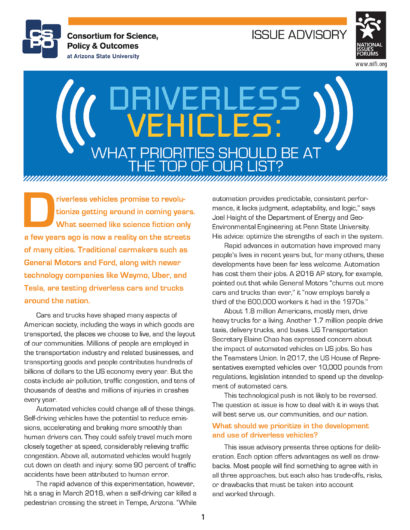 To provide a platform for community members to engage with decision makers about driverless vehicles, CSPO and the Paris-based Missions Publiques launched an unprecedented program of public consultation. Our Driverless Futures was part of an international collaboration led by Missions Publiques to bring together the voices of hundreds of individuals in public forums across cities in North America, Europe, and Asia. Informed, deliberative, and neutral, these forums generated critical information for decision makers to prepare for the future of driverless mobility. Our Driverless Futures built on previous project work sponsored by the Kettering Foundation aimed at understanding the public’s top priorities with respect to automated vehicles. 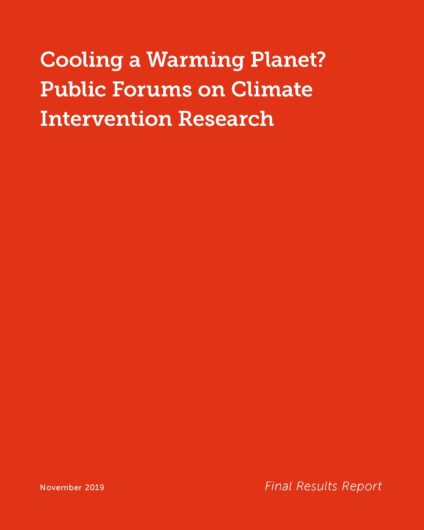 In light of political and technological difficulties of meeting climate change mitigation targets, a third response to climate change has gained increased interest: intentional manipulation of the climate to reduce the negative impacts of warming, or geoengineering. By engaging with diverse groups of lay citizens, the project team aimed to understand whether and how reasoned deliberation among citizens could usefully inform geoengineering research governance. The project team also studied how public input influences the way scientists, funders, and other stakeholders approach geoengineering research. By working with citizens to develop a balanced framing of the profound questions raised by geoengineering research, this project also sought to help experts and decision makers benefit from the insights and priorities of the public.

Funded by the National Oceanic and Atmospheric Administration (NOAA) Office of Education (OED) and led by CSPO and the Museum of Science Boston, this three year project created a next-generation, replicable institutional model for strengthening community resilience to a variety of hazards. The project team engaged lay citizens to discuss the hazards they face and improve public awareness of these hazards; increased the capacity of museums as convening institutions for public engagement; incorporated the coastal, weather, and climate science needed to inform decisions; and involved the public directly in decisions about measures that contribute to resilient communities, ecosystems, and economies. The process generated materials and methodologies, along with a support network of experienced facilitators, that museums and schools could use for future programs and informal science education (ISE) to increase environmental science literacy and strengthen community decision-making. 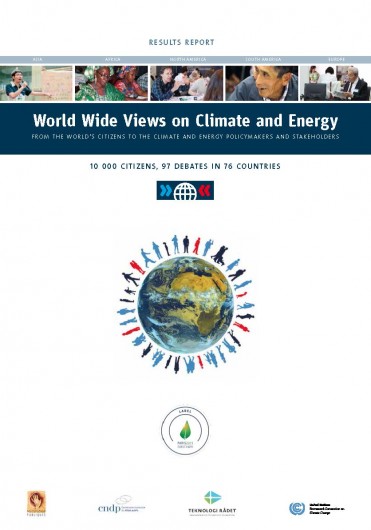 World Wide Views on Climate and Energy (WWViews on Climate and Energy) was a global citizen consultation providing unique information about how far citizens around the world are willing to go in order to deal with climate change and to bring forward an energy transition. As part of this international project, CSPO organized four citizen deliberations in the United States. Citizens expressed their views on an identical set of questions, designed to reflect policy controversies at the global COP climate negotiations and political discussions about climate and energy in general. The results were published in real-time via a web-tool, allowing for easy exploration and comparisons of results (one country with another, developed countries with developing, etc). A summary results report was released on September 26, 2015 at New York at a side event during the UN General Assembly meeting. 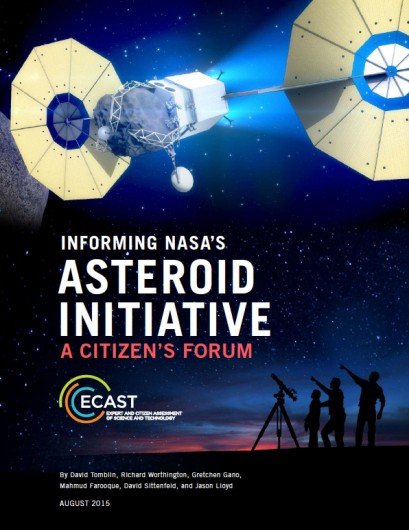 This project served as the pilot project for the newly established ECAST network. ECAST partners worked collaboratively with NASA to design, test, develop, implement, analyze, and assess two in-person and one online citizen deliberations for collecting informed public views on NASA’s Asteroid Initiative. The one-day in-person deliberations were hosted in Boston and Phoenix. The online forum was six weeks in duration and involved self-selected participants. The public views on the Asteroid Initiative collected from the forums and the assessment report provided input to early stage planning of the Asteroid Initiative and NASA’s other engagement activities.

ECAST’s first large scale project was coordination of the U.S. component of the World Wide Views on Biodiversity. The WWViews Biodiversity global citizen consultation, conducted in 25 countries on September 15, 2012, provided input to the Eleventh Council of Parties of the UN Convention on Biological Diversity (CBD) that took place the following month.