Everything You Know About Shark Conservation is Wrong 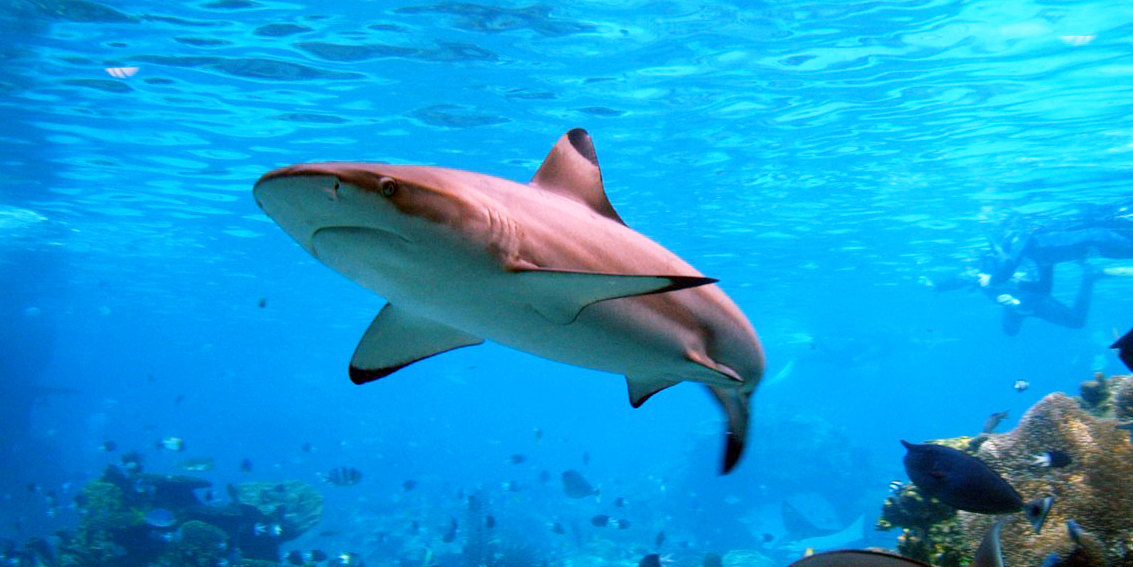 After watching the cinematic masterpiece Deep Blue Sea, a movie about genetically engineered sharks that go on a rampage, I spent nights terrified of traversing my room’s navy blue carpet in the dark to make it to the bathroom. Many years later, I’m proud to say that I did safely make it to the bathroom and that I’ve since overcome my fear of sharks. While I’m still somewhat embarrassed about those childhood fears, I imagine that many of us have similar anecdotes about shark phobias—or may even have current fears.

On the other end of the spectrum, it seems like sharks have become quite trendy. Between Left Shark’s stellar Super Bowl performance a few years ago and the popularity of Discovery Channel’s Shark Week, sharks can feel like dolphins’ cool, edgy friend. I knew little about sharks and even less about effective methods for their conservation until the science policy think tank where I work hosted a talk by David Shiffman, an Arizona State University postdoctoral researcher, marine conservation biologist, and award-winning expert in public science engagement. During his seminar, he busted some myths about sharks and spurred reflections about how we think about our values and conservation efforts.

Myth #1: Sharks are a big threat

Movies have dramatically shaped public perception of sharks—most notably the quintessential shark film Jaws. Even decades after the film’s release, Shiffman explained, “there’s almost always someone in the audience at my public talks about shark research and conservation who cites Jaws as ‘proof’ that sharks are scary and bad.” But sharks are mostly not a threat to humans. Shiffman noted that in a typical year, more people are killed by falling flower pots, by collapsing vending machines, and by falling off a cliff while taking a selfie. (Please let us be better than that.)

Not only are sharks not a major threat, but humans are better off with a healthy shark population because of the important role they play in maintaining ocean food chains.

Counter-myth: Public fear is the biggest threat to sharks

So maybe we feel bad about our distrust in sharks and want to mend this relationship. Shiffman emphasized that wildlife harassment is not the way to do this. Respectful appreciation of sharks via some types of ecotourism can be a positive way to combat public fear. Not all ecotourism endeavors are conducted in a manner that respects sharks and their habitats. (Don’t be a Darla.)

Myth #2: Ecotourism is the answer to conservation

Shark ecotourism can help local economies and promote conservation in some cases. However, a study by Shiffman and colleagues found that wildlife tourism of apex predators (sharks, crocodiles, big cats) can provide economic incentives for their conservation only under some conditions. The unique characteristics of the region and the predator will affect whether or not tourism actually helps achieve conservation goals. In many cases, the species of sharks that are most at risk are not the types that would typically be seen during your ocean Instagram photoshoot.

Myth #3: Finning is the biggest threat to sharks

The practice of finning in order to fulfill a global desire for shark fin soup has garnered a lot of attention. The legal definition of “finning” refers to catching a shark, cutting the fins of its body, discarding the body at sea where it will then bleed to death or drown, and then selling the fins on land. But if the shark’s body makes it to land, then it’s no longer considered finning. Most people don’t realize this. Finning has been illegal in the United States since 1993 yet online petitions calling for its ban frequently circulate the internet. In addition to the finning ban, successful ad campaigns in China have led to a significant decline in this practice over the last 20 years.

Instead of just talking about finning, Shiffman asserted that the biggest threat to sharks is unsustainable overfishing, including for fins and meat, and via bycatch.

Within the scientific and fisheries management communities, there is a general consensus that sustainable fisheries can and do exist. Further, Shiffman and his colleague found that 1) the United States has some of the most sustainable shark fisheries in the world; and 2) a proposed U.S. ban on the sale of shark fins would harm these sustainable fisheries and have little effect on global killing of sharks.

Myth #5 (my two-cents): There is only one right way to protect sharks

There are many ways that we can protect sharks. A ban on the sale of shark fins is one option; sustainable shark fisheries is another, as are many other options.

Science can show us some of the demonstrated and potential effects of different policy options but whether and how we protect sharks really comes down to our values. My work with the  Consortium for Science, Policy & Outcomes brings together members of the public to discuss these values questions underlying important sociotechnical issues. For more information, check out our website or come to one of our events. I promise we don’t bite!

Leah Kaplan is a program specialist at the Consortium for Science, Policy & Outcomes. A version of this post was published on the EcoWomen blog.


Everything You Know About Shark Conservation is Wrong
Is Our Future Nuclear?
Frogs, Oil, Sustainable Development