Fall 2017 Issues in Science and Technology

The new issue features a special editorial package on science and religion. 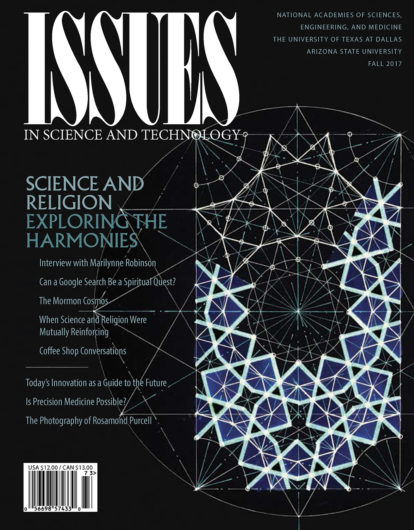 Join us to launch the Fall 2017 issue at the National Academies in Washington, DC on October 13, 2017! More information about Science and Religion—Exploring the Harmonies can be found here.

A few years ago, Lee Gutkind (founder and editor of Creative Nonfiction magazine) and Daniel Sarewitz (co-founder of CSPO and editor of Issues in Science and Technology) decided that a culture often divided by putative fault lines between science and religion might benefit from some new and different stories about their interrelations. If stories are especially good at making sense of the ambiguities and contradictions of the human condition, what stories might communicate a more complex and even fruitful relationship between science and religion? Several of them are in the Fall 2017 Issues in Science and Technology. These stories are the winners of a writing contest about the ways in which science and religion “productively challenge each other as well as the ways in which they can work together and strengthen one another.” (The contest is part of a bigger project called Think-Write-Publish: Science and Religion.)

The first-prize winner is Rachel Wilkinson’s “Search History,” a personal exploration of how Google seems to have become the way many of us seek answers to our deepest questions in today’s world—and what we may therefore have lost in the process. Second prize is for “‘Shuddering Before the Beautiful’: Trains of Thought Across the Mormon Cosmos,” by Jamie Zvirzdin, a story that recounts the dual forces of Mormonism and astronomy in her life, leading up to her decision to leave the church. “The Best Panaceas for Heartaches,” by Kristin Johnson, is our honorable mention, an exploration of how 18th and 19th century science and religion reinforced one another to help natural scientists in England cope with what was then the inescapable tragedy of childhood mortality. The prize-winning stories are bookended by two wonderful contributions to the project. First, to introduce the science and religion theme, Gutkind and Sarewitz interviewed the brilliant and humane writer Marilynne Robinson. And to wrap things up, the section includes a generous-spirited, funny, and at times surprising piece of narrative reporting, “Beyond the Primordial Ooze,” from the writer Dinty Moore.

And that’s only half of what this edition of Issues has to offer. In “Character and Religion in Climate Engineering,” two professors of religion, Forrest Clingerman and Kevin O’Brien, working with a professor of atmospheric sciences, Thomas Ackerman, provide a perfect proof-of-concept for our science-and-religion project in making the case for how religious traditions provide the necessary foundation for thinking about the qualities of character—responsibility, humility, and justice—that society should seek in deciding whether to engage in the godlike task of engineering the climate in the face of anthropogenic climate changes.

Elsewhere in this issue, Jeffrey Funk (“What Does Innovation Today Tell Us about the US Economy Tomorrow?”) offers a novel, helpful lens for looking at where most innovations are coming from these days. Meanwhile, Kenneth Weiss (“Is Precision Medicine Possible?“) wonders if all that science has learned about genomics over the past couple of decades is raising a question that no one wants to hear: What if the idea of precision medicine, which motivates so much hope and hype around the future of biomedical science, is not possible, even in theory? Finally, if Congress wants to reform the nation’s tax system and rebuild its infrastructure, John Helveston (“Navigating an Uncertain Future for US Roads”) points to the benefits of moving from a fuel tax—which is fast becoming unsustainable in the face of automotive innovations such as electric vehicles—to a “vehicle miles traveled” tax.

In the book review section, Katharine L. Jacobs takes a close look at water issues in the US West in her review of John Fleck’s Water is For Fighting Over. Frank Pasquale assesses the latest book from Andrew McAfee and Erik Brynjolfsson, Machine, Platform, Crowd, and finds their case for the benefits of machine learning is “overstated.”

This issue’s text is accompanied by the stunning photographs of Rosamond Purcell and mesmerizing patterns of Richard Henry. 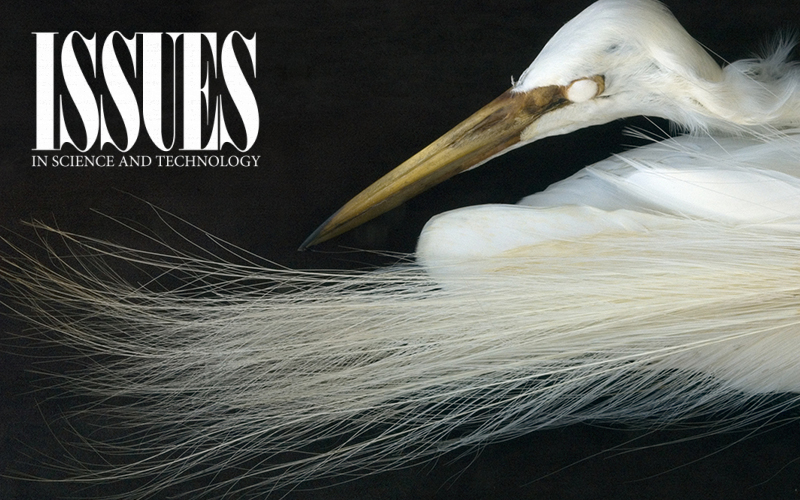