New Book: A History of Biophysics in Contemporary China 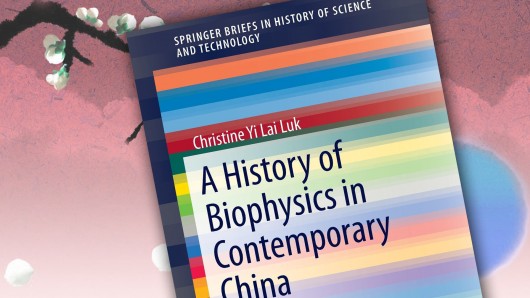 The publication of the first scholarly book is likened to giving birth to a first child. Springer recently delivered my firstborn–A History of Biophysics in Contemporary China–a truncated monograph from my doctoral dissertation.

A History of Biophysics in Contemporary China is about the story of biophysics in twentieth-century China, which seeks to answer a general question: why biophysics? And why biophysics in China in particular? China has now become the focus of many contentious issues in science and technology (most recently in the controversy triggered by the case of genetically altered embryos). What is so special about biophysics?

Those who are interested in the relationship between science and politics in the People’s Republic of China would point out that biophysics was not the hub around which all of contemporary China’s interests in science and technology revolved. The disciplinary history of biophysics was only part of a larger and more complex phenomenon of science’s interaction with the state. The somewhat unique position of biophysicists in building their disciplinary structure and community was only part of the politics surrounding the governance and autonomy of science.

Although biophysics was not a policy priority for the revolutionary-minded party leadership, it is still an important area of the society in which several fundamental issues intersect. Biophysics thrived in the PRC because the disciplinary leaders devised strategies to gradually integrate the lives of ordinary people with the political and social developments of its time. It is the intersections between biophysics and the state, science and politics, discipline and mission, cell biology and physical intervention that make biophysics a useful analytical lens to assess the history of science and technology in contemporary China.

Those who are interested in the social shaping of science might also find useful material in the book. At the center of my story is a field of science that is broadly conceived with an amorphous definition, i.e. “defined by doing” as one biophysicist puts it. Because of its inherent flexibility, biophysics is an ideal candidate to examine how supra-scientific considerations (i.e. politics) shape the varying content and context of this scientific discipline. This is why biophysics offers a good vantage point to analyze how factors in different historical and cultural circumstances enabled the formation of science.

But is there a conceptual limit to the social shaping of science? If science is circumscribed by external factors, does it follow that internal merits have no place at all in science studies? One thing that has become clear in my study of biophysics is that peer-reviewed recognition from the mainstream academic community does matter to the disciplinary formation of biophysics. With all due respect to his political currency and scientific leadership, Bei Shizhang, the father of biophysics in China, was not a very credible scientist, at least not among the mainstream English-speaking scientific community. Michael Gordin, a distinguished historian of science at Princeton recently wrote about the rise of English as the lingua franca of science. Indeed, the “anglophone triumph in the battle for science” is inseparable from the collapse of communism and the overshadowing of (American) English over competing languages in Europe (mostly German and Russian). Bei’s inability to accrue some forms of recognition from the Anglo-American scientific authority (i.e. by publishing in Nature or Science) blemished his academic reputation and attracted enduring skepticism from other Chinese scientists. Among the many factors for his lack of scholarly achievement, I highlight his neo-Lamarckian theoretical conviction, Soviet cytological overtones with the pseudo-scientific practice of O. B. Lepeshinskaya, and last but not least, his lack of English proficiency (he was fluent in Chinese and German though).

Accreditation from honorary academic channels does matter to the development of science. The perennial skepticism to Bei’s scientific credibility was damaging, and allegedly his life-long regret. The ability to publish in top English (not Chinese or German) academic journals is a crucial mark of international legitimacy in science. In the case of Bei Shizhang, such legitimacy appeared all the more important because he studied what would later be called “molecular biology”––a field that thrived in postwar America and faltered in the Soviet Union and other Communist states. As a result, he was greeted with more suspicion from fellow Chinese biologists. The situation would have been quite different were he a specialist in number theory, for example.

What is interesting about Bei Shizhang is that even though he was not a world-renowned scientist (definitely not a Nobel laureate), he was particularly good at drawing existing resources in the political arenas to facilitate the growth of a marginal discipline known as biophysics. As a visionary institutional builder, his most important legacy was the discipline he founded. His primary achievement may well be seen as having constructed a disciplinary foundation in which a relatively broad range of interests were embedded. If you are interested in the topics he incorporated into a new scientific discipline in contemporary China, this book may be for you.

Christine Luk is an alumna of CSPO’s Human and Social Dimensions of Science and Technology (HSD) program. She can be reached at [email protected].