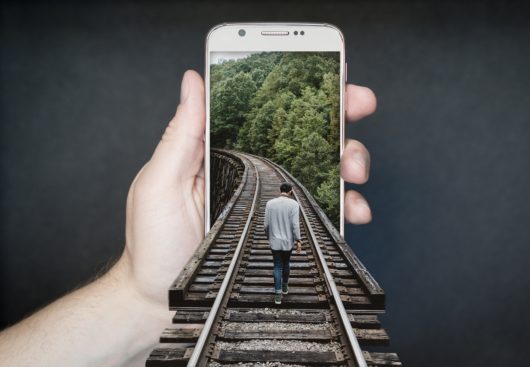 On April 3, 2019, South Korean carrier SK Telecom claimed to have launched the first 5G mobile network by activating the connection to six celebrities representing Korea. The launch was reportedly rushed forward by two days in order to beat Verizon’s launch of 5G services in parts of Chicago and Minneapolis around the same time. Although You Young-min, the South Korean minister for science and information technology, proudly proclaimed that “the government and private companies came together to achieve the world’s first commercialized 5G services,” a spokesman for Verizon called it a PR stunt: “They gave phones to six celebrities and they’re trying to say that constitutes a network launch?”

Why all this excitement about a mobile communication service that many consider merely a sequel to the current 4G LTE services being enjoyed globally? As IEEE Spectrum notes, “with 5G, users should be able to download a high-definition film in under a second (a task that could take 10 minutes on 4G LTE).” That could come in handy as one is rushing to the gate to make a cross-country flight. But even more importantly, experts believe 5G will enable “the development of other new technologies, too, such as autonomous vehicles, virtual reality, and the Internet of Things.”

With its potential to deliver on so many promises, it would appear that the rapid deployment of 5G would be warmly embraced by private enterprises and governments everywhere. Indeed, the Federal Communications Commission (FCC) in the United States has issued its 5G Fast Plan and, as noted above, companies from Asia to America are eager to build their 5G networks. At the same time, there is a sense in some quarters that regulatory apparatuses are not ready for the large-scale implementation of 5G networks. Some of the issues that experts have raised include:

Given the broad scope of these issues, my focus here will be on the first of these concerns; I will leave the others for possible future postings. To understand the context of local autonomy vs. federal rules, we need to discuss first in general terms the architecture of a 5G urban network.

Mobile communication systems rely on the transmission and reception of electromagnetic (radio) waves by handheld phones. All systems, from the first generation (1G) to the forthcoming fifth generation (5G), also use the cellular concept, whereby a geographical region is split into adjacent non-overlapping “honeycomb” cells with a base station located at the center of each cell. In order to communicate with another cell phone (in the same area or far away), a cell phone signal is transmitted through its local base station, which in turn can use other base stations as a relay chain to reach the desired cell phone.

In an urban environment, a 5G network will let a very large number of users send and receive vast amounts of information rapidly and accurately. This will require the use of two related technological features: 1) higher frequencies for the radio signals, and 2) small cells that can compensate for the limited range of higher frequencies.

The first four generations of mobile networks, including the current 4G LTE, use radio frequencies below 6 gigahertz (GHz). The 5G systems will use these frequencies as well, but in order to deliver their “turbo-charged” performance in terms of speed and bandwidth, they will also make use of higher frequencies in the so-called millimeter-wave band (30-300 GHz). Signals at these higher frequencies have more limited range and do not easily penetrate barriers such as walls.

In order to deliver the performance expected of them, 5G networks will use small cells. According to a report in IEEE Spectrum, “Small cells are portable miniature base stations that require minimal power to operate and can be placed every 250 meters or so throughout cities. To prevent signals from being dropped, carriers could install thousands of these stations in a city to form a dense network that acts like a relay team, receiving signals from other base stations and sending data to users at any location.”

The ongoing rollout of this dense urban network of small cells is a bone of contention between federal rule-making (the FCC Order of September 26, 2018) and the local power vested in towns and municipalities. With a view to fast-tracking the 5G rollout, the FCC plan, as outlined on the agency’s website, has “reformed rules designed decades ago to accommodate small cells. The reforms ban short-sighted municipal roadblocks [e.g., unreasonably high fees and burdensome zoning requirements] that have the effect of prohibiting deployment of 5G and “give states and localities a reasonable deadline to approve or disapprove small-cell siting applications.”

This enlightened view of the FCC plan is not shared by some town mayors. In a legal summary prepared for Congress, legislative attorney Chris Linebaugh reports: “Some cities … have criticized the Order as federal overreach. For instance, the CEO and Executive Director of the US Conference of Mayors stated that the Order ‘misapplies federal law to federalize local public property’ and ‘needlessly introduce[s] increased risk of right-of-way and other public safety hazards.’”

On the other hand, as Linebaugh notes, some mobile service providers feel that the FCC plan should have gone even further in asserting federal authority over local foot-dragging. The FCC has set timeframes for reviews of applications for small-cell sites by local authorities. Under these “shot clocks,” local governments have 60 days to make a decision for sites using existing structures (e.g., utility poles) or 90 days for new structures. The service providers wanted the FCC to include a “deemed granted” provision in its Order, whereby a site application is automatically approved once the applicable shot clock expires. The FCC chose not to include this “deemed granted” remedy in its Order, arguing that a service provider can seek expedited relief in court if a local jurisdiction fails to make a decision in a timely way.

Many municipalities petitioned the Ninth Circuit Court of Appeals for a review of the FCC Order, claiming the FCC exceeded its statutory authority and its actions were arbitrary and capricious. In response, several service providers (including AT&T, Verizon, and Sprint) filed multiple petitions alleging that the lack of a “deemed granted” provision in the FCC Order was arbitrary and capricious.

Initially the petitions by the service providers were consolidated in the Tenth Circuit, but they have since been referred to the Ninth Circuit, where the towns had filed their petitions. However, the Tenth Circuit chose not to stay the FCC Order (effective since January 14, 2019) pending the outcome of the lawsuit. Linebaugh notes that “given the litigation surrounding the FCC Order, Congress may be interested in addressing the extent to which the Telecommunications Act [underlying the FCC Order] limits state and local action affecting 5G infrastructure deployment,” but so far no such legislation has been introduced in the 116th Congress. Stay tuned!

In August 2020, the judges of the Ninth Circuit Court issued their decision in favor of the “FCC Fast Plan” rules, writing: “Statements in the [FCC proceeding’s] record from wireless service providers, and an empirical study, are cited to support the conclusion that limiting fees will lead to additional, faster deployment of 5G technology throughout the country.” The court also upheld the FCC’s changes to “shot clocks” that give towns a set amount of time to act on carriers’ applications to deploy small cells. However, the judges overturned the commission’s preemption of certain aesthetic requirements that local authorities impose on cellular installations.

Rajeev Bansal is a professor of electrical engineering at the University of Connecticut. He is an affiliated policy research scholar at CSPO.