Winter 2020 Issues in Science and Technology

Authors in the latest issue reimagine science institutions, discover the hidden influence of academic publishers, warn against the claims of precision medicine, and much more. 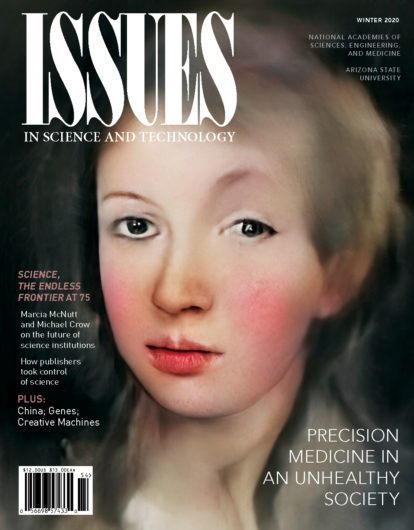 Science, the Endless Frontier is the policy document that provided the blueprint for public investment in scientific research in the United States for the past 75 years. Its influence on science policy would be difficult to overstate, and the research enterprise it helped produce remains one of the world’s most powerful and productive.

But two essays in the Winter 2020 Issues in Science and Technology—the first in a year-long series of articles on the anniversary of Science, the Endless Frontier—reassess the legacy of this report and argue that the time has come to put science policy on a firmer footing in order to confront the challenges of the twenty-first century:

Also in this issue:

And much more, including book reviews, letters, and artwork.