Summer 2019 Issues in Science and Technology

The empty radicalism of the climate apocalypse, protecting the accuracy of the 2020 Census, artificial intelligence for a social world, and much more. 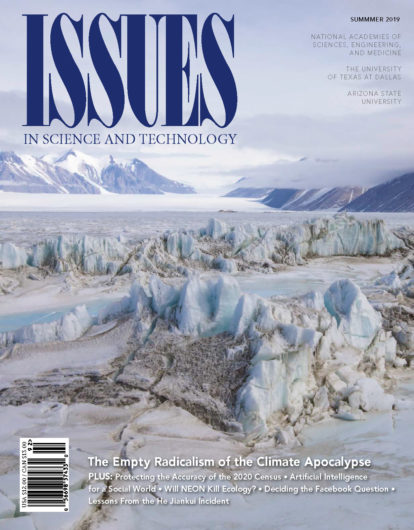 As warnings of imminent climate catastrophe become more frequent and dire, climate activists and progressive politicians are calling for an array of ambitious policies that will, finally, produce results. These proposals have been embodied most recently in the Green New Deal, the major policy program put forth by progressive Democrats. But do these proposals add up to a serious blueprint for making some progress?

In the cover story to the Summer 2019 Issues in Science and Technology, Ted Nordhaus casts a critical eye on what it would mean to get serious about tackling climate change. Nordhaus, the cofounder and executive director of The Breakthrough Institute, finds calls for a “World War II-style mobilization” against global warming are long on grand rhetoric and short on practicable proposals that would actually make a difference:

At a moment when advocates make a range of demands that are simultaneously vague and controversial, from ending capitalism and economic growth to rejecting materialism and consumption to reorganizing the entire global economy around intermittent sources of renewable energy, almost no one, in either electoral politics or nongovernmental organizations, seems willing to demand that governments take direct and obvious actions to slash emissions and replace fossil energy with clean.

Elsewhere in this issue, Matthew C. Nisbet examines the role of the media in describing climate change and framing responses to it. Xiaomei Zhai, Ruipeng Lei, and Renzong Qiu provide a Chinese perspective on the He Jiankui scandal involving CRISPR’d babies. Justine Cassell finds that there are ways that artificial intelligence can work more effectively and collaboratively with humans, helping researchers to better understand social interaction. Constance F. Citro delves into the history of attempts to protect the accuracy of the US Census and what they might mean for the 2020 count. Mark Sagoff finds that efforts by the National Science Foundation to turn ecology into Big Data science may mostly add up to a waste of time and money. Clarke Cooper sees problems with Facebook and the other tech giants as merely symptoms of larger, more systemic challenges to democracy caused by a world of infinite convenience. And Jim Ross recounts his experiences dealing with private sector institutional review boards, taking a close look at how they work to protect the rights of human research subjects.

In books, Reiner Grundmann evaluates the role of experts in policy-making as described in Work in Progress: Economy and Environment in the Hands of Experts, edited by Frank Trentmann, Anna Barbara Sum, and Manuel Rivera. The modern idea of the global environment has become so ingrained that we rarely consider it to be a recently constructed concept; Deborah Poskanzer explores how this notion developed in her review of The Environment: A History of the Idea by Paul Warde, Libby Robin, and Sverker Sörlin. Finally, Lisabeth Fisher DiLalla finds much to like in Robert Plomin’s Blueprint: How DNA Makes Us Who We Are, about the central role of genetics in human behavior.

The Summer issue also features Stefanie Bürkle’s photographs of artists’ studios and scientists’ laboratories, which uncover similarities in these “workshops of knowledge.” And the vivid Antarctic photographs of Helen Glazer reveal the icy continent as a place of wonder and raw beauty—perfect for contemplating in the steamy heat of midsummer. 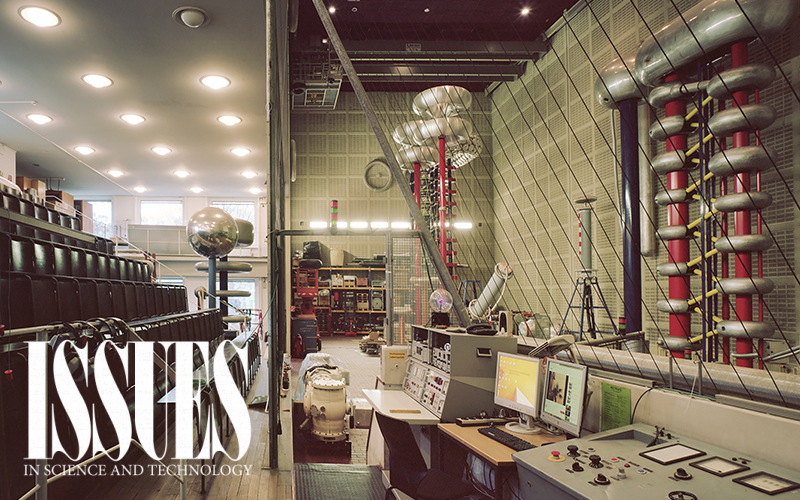