Summer 2017 Issues in Science and Technology

Now is no time for rubbernecking, according to Kevin Finneran, the editor-in-chief of "Issues in Science and Technology." 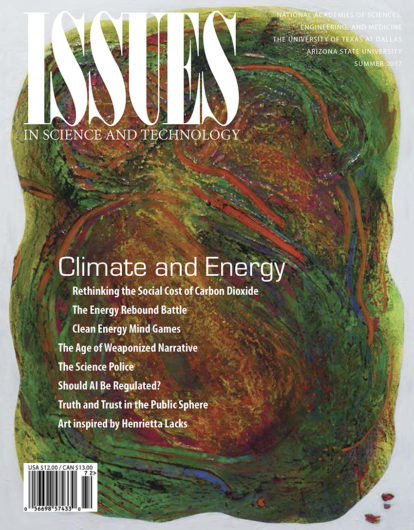 Among the most annoying driving experiences is to endure a long traffic jam only to discover that the cause of the delay is not an accident on your side of the road, but rubbernecking at the results of an accident on the other side. We all know that nothing is gained by staring at the wreckage and that it will unnecessarily slow down everyone’s progress, but we can’t help ourselves. The same phenomenon is now evident with political rubbernecking.

Today’s roadside disasters include a front-page New York Times story that President Trump might fire FBI special counsel Robert Mueller and a comical video of a cabinet meeting at which all the members took turns heaping praise on a smirking president. Can Saturday Night Live top this? But the Mueller story is based on the word of an alleged friend of the president who had visited the White House but might not have actually spoken with Trump, and the ritual humiliation of the cabinet was completely devoid of policy substance.

Each day’s headlines seem to include some new deviation from the political norm, some insult to evidence-based logic, some gratuitous insult to a foreign ally, or some other example of intellectual carnage, to borrow a phrase. Their gruesomeness demands our attention, takes time from the work we know we should be doing, and slows national progress on the road to the future. Deep down we know that these tweets, bloviations, and untruths, lacking a foundation of fact or logic, will ultimately crumble under the weight of their own preposterousness. The mass hysteria will dissipate, and we should be ready with a map to sanity.

The car wreck that the research community is currently gawking at is the Trump administration’s proposed FY 2018 budget. Matt Hourihan and David Parkes, who write our From the Hill section, do their usual outstanding job of summarizing the R&D budget news in this issue. The proposed budget is indeed a sight of reckless butchery; the president has taken a cleaver to almost every part of federal R&D activity. Environmental science and alternative energy technology are particularly mangled, but even the Department of Defense, the apparent beneficiary of this wholesale budget priority realignment, would experience cuts to its basic research budget.

The proposed budget is a nightmare, and there is a certain ghoulish pleasure in obsessing over the details. But it is a Washington tradition to announce every year that the president’s budget is dead on arrival, even when the president’s party controls both houses of Congress. This budget is even deader than most. Republican congressional leaders have been unusually blunt in their lack of enthusiasm. The problems begin with glaring arithmetical errors, unhinged assumptions about economic growth, and claims of revenue from sources such as the estate tax that the administration seeks to eliminate. These problems will derail this proposal before the discussion of spending priorities even begins.

Although the nation’s intellectual elite will almost surely take some satisfaction in finding common ground across the ideological spectrum in mocking the president’s indifference to the conventions of governing, the value of the press, and the need for evidence and logic to support public policies, this is not an adequate response. Smug derision is too easy. A more constructive response would be to capitalize on this sudden meeting of the minds to develop a rigorous, less ideological approach to the thorny challenges that face the nation and the world. Although lack of experience and discipline is likely to result in the implosion of the Trump agenda, that in itself is not the ideal outcome. Instead of wasting our time transfixed by the wreckage, we should be building an alternative program for guiding the country.

The articles in this edition of Issues aim to do just that, to tackle the fundamental aspects of science and society that will shape the world’s future direction. Several authors take on the challenges that confront science itself. Sheila Jasanoff (“Back from the Brink: Truth and Trust in the Public Sphere“) provides an insightful historical review of the evolving role of scientific expertise in public affairs and makes a compelling case for a nuanced, transdisciplinary, and collective effort to arrive at some widely shared public truths that can provide a foundation for public policy debates. Richard Harris (“Publish and Perish“) addresses pervasive evidence of a decline in biomedical research reliability. He acknowledges that research is a process of continuous exploration and revision. As scientists understand, no paper should be considered sacred doctrine, but Harris highlights some of the undesirable incentives in the research system that encourage detrimental research practices that could erode overall scientific integrity. Keith Kloor (“The Science Police“) worries about what happens to scientific disinterestedness in research areas such as climate change and endangered species where the public debate has become highly politicized. Scientists should be engaged in discussions of public policy, but they need to do so without losing touch with the underlying scientific principle of truth seeking. Scientific rigor and openness are what earn researchers respect in public discourse. We should leave the hand-to-hand combat on political maneuvering to the pros.

While the research community is getting its own house back in order, it can focus on the plate tectonics of scientific and technological progress. The research lab might look remote, secluded, esoteric, but it actually provides an essential vantage point for identifying trends and capabilities that will have an earth-shifting influence on the future. Amitai and Oren Etzioni (“Should Artificial Intelligence Be Regulated?“) provide a useful context for understanding the progress of artificial intelligence. They distinguish between trends that are an extension of current activities and those, such as autonomous weapons, that deserve close attention because they are qualitatively different from what preceded them. Likewise, Braden Allenby (“The Age of Weaponized Narrative“) reviews the long history of information warfare and warns that new technology is enabling a capability in “weaponized narrative” that is more efficient, more insidious, and more powerful than what we have managed before. As the world’s leading economic and political leader, the United States is a particularly appealing target for this type of asymmetric warfare.

Social science research can also help us probe deeper and further. Granger Morgan and his colleagues (“Rethinking the Social Cost of Carbon Dioxide“), who were pioneers in the application of benefit/cost analysis to climate and energy policy, have come to recognize that this tool, which has been applied widely and successfully in many aspects of environmental policy, is ill-suited to the assessment of greenhouse gas emissions because of their extraordinarily long residence time in the atmosphere. When looking ahead fifty or a hundred years, a very small adjustment in the discount rate used to measure an investment’s value in the future can have an enormous impact on the result. Thus, with a little tinkering, one can produce almost any result one wants regarding the social cost of emissions. They go on to explain why a fundamentally different approach is therefore needed to guide climate policy.

Ted Nordhaus (“The Energy Rebound Battle“) taps the insights of social science to explain why very desirable and very impressive improvements in energy efficiency technology will not deliver the overall energy savings that they promise. Energy saved by end users by buying more efficient light bulbs and air conditioners tends to be plowed back into more energy-intensive sectors of the economy such as construction and manufacturing. In the short term this means that efficiency may not be a good tool for significantly reducing greenhouse gas emissions. But the story doesn’t end there. The production sectors of the economy that benefit from efficiency gains also help drive economic growth worldwide, and Nordhaus sees a future when the world reaches a stage of development at which efficiency actually will begin reducing overall energy use—but we’re not there yet. David Ropeik (“Clean Energy Mind Games“) delves into the complicated psychology underlying public opinion toward nuclear power. He concludes that it is the dynamics of group identification—not economics, safety, or climate concerns—that is the key factor in how people perceive the technology.

The humanities, too, have insights to share. Philosopher Evelyn Brister (“Genome Fidelity and the American Chestnut“) examines how deeply held beliefs about the natural world are at the heart of debates about genetic engineering and ecological balance.

Science and the humanities alike are founded on the use of evidence and logical argument. They seek to avoid the unfounded assumptions, knee-jerk reactions, and group-think that have come to dominate much political discourse. Neither of them provides simple or easy answers to society’s questions, and neither of them provides the surge of adrenalin that comes with viewing a disaster. We’ll never be able to completely resist the rush that comes with seeing car parts or common sense spread across the asphalt, but the sooner we can return our attention to the road in front of us, the better the chance that we will arrive at our desired destination.

In the Summer book review section, Kristin Bratton Nelson reviews Meredith Wadman’s The Vaccine Race, about vaccine development and the very human figures behind the creation of the rubella vaccine. G. Pascal Zachary looks at how innovation actually works in assessing the new book from Venkatesh Narayanamurti and Toluwalogo Odumosu, Cycles of Invention and Discovery. Why we call our age the information age is the subject of David Auerbach‘s review of Ronald Kline’s The Cybernetics Moment. Finally, defense-led innovation expert Richard Van Atta finds two new books about the Defense Advanced Research Projects Agency (DARPA), The Pentagon’s Brain by Annie Jacobsen and The Imagineers of War by Sharon Weinberger, to be missing crucial parts of the agency’s history. 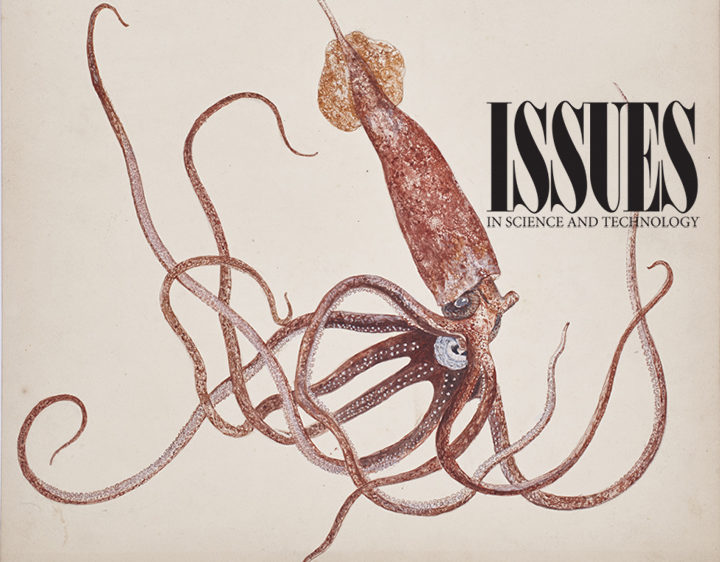