After launching an innovative program of citizen engagement on controversial geoengineering research, CSPO shares the results with climate engineering experts.

The Consortium for Science, Policy & Outcomes (CSPO) and its partners recently convened a group of over forty climate engineering experts and policy stakeholders to discuss the results of a project studying public perspectives for geoengineering research governance. CSPO, a research unit in the School for the Future of Innovation in Society at Arizona State University, hosted the event to mark the publication of the project’s final results report, which outlines key findings from two public forum deliberations in September 2018.

As an issue with high scientific uncertainty and contested values, geoengineering research (the study of a variety of technologies intended to reduce the impact of climate change by intervening directly in Earth’s climate system) is a prime subject for public deliberation. In 2017 CSPO and its partners, with generous funding from the Alfred P. Sloan Foundation, launched a project to explore public preferences for the research and governance of a type of geoengineering called solar radiation management (SRM). CSPO hosted two public forums, in Boston and Phoenix, which brought together 171 members of the public for day-long deliberations on potential research directions, funders, and governance schemes for SRM research. These deliberations yielded new insights into the conditions under which the public could accept SRM research, including novel findings on public preferences for SRM funders.

At the report’s publication event, project team members shared the results of their work with representatives from academic, governmental, nongovernmental, and philanthropic sectors. Attendees included members of the Harvard University climate engineering research project SCoPEx (Stratospheric Controlled Perturbation Experiment) team, the National Oceanic and Atmospheric Administration, the Union of Concerned Scientists, and the National Academies of Sciences, Engineering, and Medicine. Following a high-level presentation of the project results, a panel of experts in geoengineering research and governance reflected on and responded to the project and the final report’s findings.

Analysis of the forum results indicates that citizens are fully capable of understanding, discussing, and evaluating the complex issues at play in SRM research. Although the perspectives and attitudes expressed by citizen participants were nuanced, the central message for decision makers was relatively simple: “Keep things small; govern transparently, flexibly, and inclusively; learn from past mistakes and be prepared to reverse course. Proceed—but with caution.”

The event stimulated rich conversation regarding the ways in which public input can support sociotechnical decision-making processes around emerging science and technology issues, and in particular how citizen perspectives can inform governance structures for SRM research. Attendees were very interested in better understanding the public’s perspectives on SRM and described CSPO’s public engagement work as vital to the future of climate science policy. CSPO will continue sharing the results of its project at the upcoming American Geophysical Union annual meeting in December and at briefings for multiple policy organizations and federal agencies. 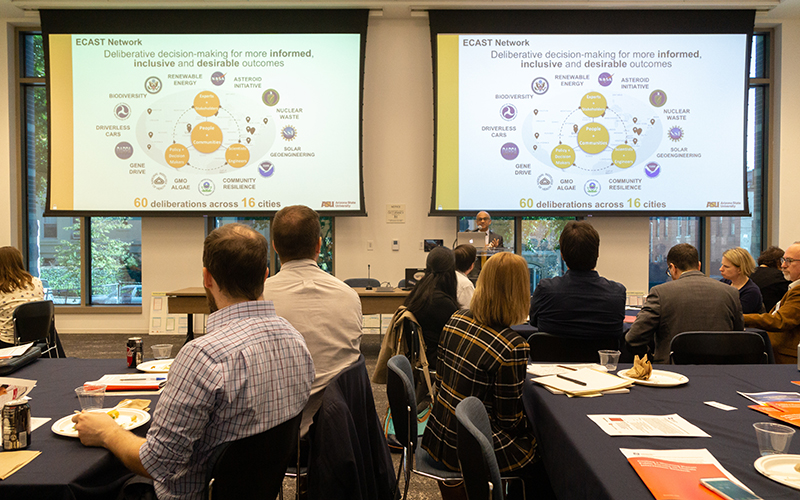