Fall 2018 Issues in Science and Technology

What effect will technological advances have on the nature of work? A special section in the new issue helps to make sense of how work is changing. 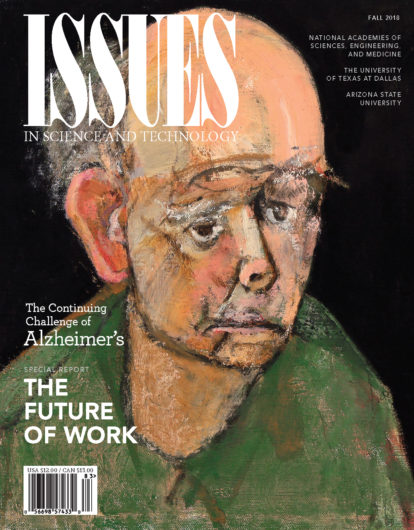 Advances in artificial intelligence, robotics, and other technologies have helped generate record profits for Silicon Valley companies, with Apple and Amazon recently valued at more than $1 trillion apiece and Google and Microsoft not far behind. But these innovations have also produced a great deal of anxiety about the future of work. The picture is so uncertain that cases can be made for a future shortage of skilled workers, a shortage of high-quality jobs, or a decline in the need to work at all.

A special section in the Fall 2018 Issues in Science and Technology helps to make sense of the evolution of work. William Bonvillian and Sanjay Sarma (“The Quest for Quality Jobs“) note that labor market upheavals are not a concern for the future: jobs, salaries, and job security are already changing rapidly. But as Philip Brown and Ewart Keep (“Rethinking the Race Between Education & Technology”) illustrate, expert forecasts of what the overall impact will be differ widely. One way that workers can thrive in this uncertain environment is to enhance their value as workers through training and education. Stuart Elliott (“Artificial Intelligence, Robots, and Work: Is This Time Different?“) outlines the choices that lie ahead, and Mitchell Stevens (“Research Universities and the Future of Work”) identifies the role that elite universities can play in informing those choices.

Other structural changes will need to be addressed. Tracy Van Grack (“Investing in Entrepreneurs Everywhere“) calls attention to the uneven geographical distribution of venture capital investment. And Sanjay Sarma and William Bonvillian (“Fixing an Imperfect Labor Market System”), in a second piece, suggest using information technology to help workers find the jobs that match their skills. The authors of these pieces have neither a perfect crystal ball nor a foolproof roadmap to the future. But their informed analysis is a welcome step away from futile handwriting (or facile optimism) and toward focused research and action.

Research and action are needed on a very different challenge as well: confronting Alzheimer’s disease. Al-though we have made some progress against the disease, Robert Cook-Deegan (“Progress against Alzheimer’s Disease?“) finds that innovation has mainly been in patient care, not biomedical advance. This lesson should inform future congressional action to deal with Alzheimer’s. Susan Fitzpatrick (“Asking the Right Questions in Alzheimer’s Research”) argues that the United States must lead the way on new directions in aging and neurodegeneration research if it is to remain the world’s innovation leader.

Elsewhere in the issue, Jennifer Kuzma (“Regulating Gene-Edited Crops”) takes a look at the advocates of second-generation gene-edited crops and discovers that they are making choices that will likely trigger another round of public opposition. An international group of researchers—David Moher, Florian Naudet, Ioana A. Cristea, Frank Miedema, John P. Ioannidis, and Steven N. Goodman (“New Principles for Assessing Scientists”)—outline valuable new principles for assessing science and scientists. And in the Philosopher’s Corner, Adam Briggle (“Fear Mongering & Fact Mongering“) explores questions of rhetoric, fact, and fear.

In this issue’s book review section, Nabila Shaikh and David Heymann assess Laura Spinney’s Pale Rider: The Spanish Flu of 1918 and How It Changed the World on the hundredth anniversary of the pandemic. Stephanie Wykstra looks at the implications of using algorithms to deal with poverty as described by Virginia Eubanks in Automating Inequality: How High-Tech Tools Profile, Police, and Punish the Poor. Irwin Feller reviews Measuring the Economic Value of Research: The Case of Food Safety, edited by Kaye Husbands Fealing, Julia I. Lane, John L. King, and Stanley R. Johnson. The private space industry is the subject of Bhavya Lal’s review of The Space Barons: Elon Musk, Jeff Bezos, and the Quest to Colonize the Cosmos by Christian Davenport.

Artwork from this issue, by artists including William Utermohlen and Sougwen Chung, can now be viewed on the beautiful new issues.org website. We encourage you to visit and explore the redesigned site, and please let us know what you think! 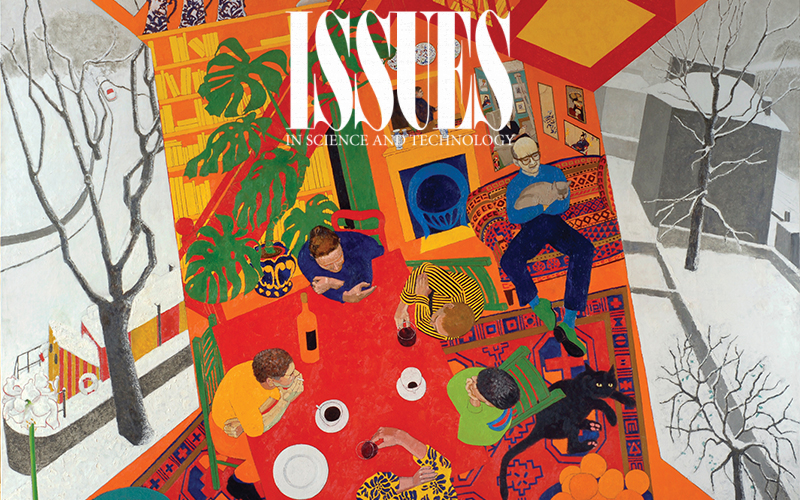