Once again, CSPO is recognized as a global thought and practice leader in science and technology policy.

Arizona State University’s Consortium for Science, Policy & Outcomes (CSPO), a research unit of the Institute for the Future of Innovation in Society, has once again been named one of the top ten think tanks for science and technology policy in the latest edition of the University of Pennsylvania’s “Global Go To Think Tank Index.”

This is the third consecutive year that CPSO has been ranked in ninth place and the fifth consecutive year it has appeared in the top ten. The Think Tanks and Civil Societies Program (TTCSP) of the Lauder Institute at the University of Pennsylvania, with the voting help of a panel of peers and experts from media, academia, public and private donor institutions, and governments, publishes the annual index ranking the world’s leading think tanks in a variety of categories.

“I’m proud of this acknowledgment from our peers who participate in the rankings,” says Dave Guston, co-director of CSPO and director of ASU’s School for the Future of Innovation in Society, “and remarkably pleased for the efforts of our faculty, staff and students that go into all the fine work that those peers have recognized.”

“One thing that really distinguishes us from other think tanks is our focus on public engagement,” says Daniel Sarewitz, CSPO co-founder and co-director. “We’re deeply committed to the idea that citizens should have a role in helping to steer powerful new technologies toward a better future for all.”

Founded in 1999, CSPO also sits at the core of the research and policy engagement activities of the School for the Future of Innovation in Society, which was created in 2015. CSPO is dedicated to understanding the linkages between science and technology and its effects on society. CSPO develops knowledge and tools that can more effectively connect science and technology to progress toward desired societal outcomes.

Notable recent projects that have solidified the Consortium’s thought-leadership status include:

Upcoming projects in 2019 include:

The Consortium draws on the intellectual resources of Arizona State University and other institutions for the scholarly foundation to assess and foster outcome-based policies across a broad portfolio. CSPO’s core commitment is to generate useable knowledge for real-world decision making in order to better align those decisions with positive social outcomes. 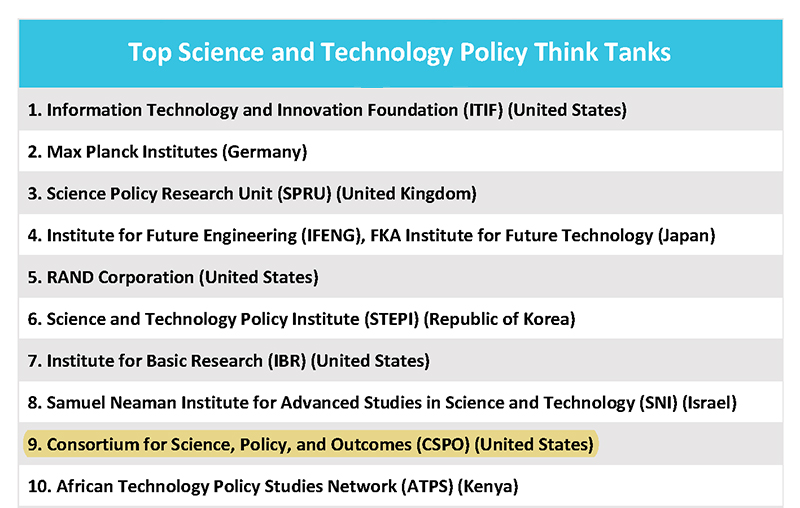