The Sand Mandala as a symbolic representation, the everyday and the academic 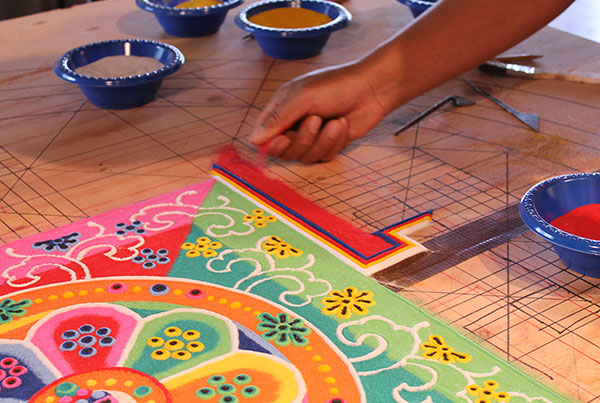 Construction of the sand mandala After the mandala is completed, the sands are swept together and dispersed in the waters of a river.

Emerge 2014 featured a variety of carefully constructed artistic objects, all manifestations of higher philosophical thought regarding art, science, culture and the individual. Among these objects, was the sand mandala, created collectively by trained Buddhist monks Lama Ngawang visiting from Mustang, Nepal and Geshe Jampa, who is Phoenix based. Hosted by Netra Chhetri, with ASU’s Consortium for Science, Policy & Outcomes (CSPO), the monks were able to create an intricate and representative work of art in the ASU Art Museum’s Combine Studio gallery space. The art form draws from the earliest Buddhist traditions, making the practice centuries old. As an observer, I found it of particular interest to juxtapose this idea against the futuristic themes of the event. Bearing witness to the construction of the sand mandala allowed visitors to experience a sense of appreciation for this tradition.

One can definitively claim that the sand mandala necessitates mental acuity, a feat of such physical complexity that it requires the strongest sense of discipline. Audiences watched as grains of colored sand were laid out with infinite care on a set, geometrically based pattern, mapped out by Lama Ngawang.  What I found personally fascinating was the mathematical basis of the mandala. It is not beautiful in spite of these rigid, mathematical traits, but rather, its beauty depends on precision.

Placed in the context of Emerge 2014’s theme, “The Future of Me,” the mandala became a representation of the complex nature of the individual. Though the piece was the culmination of the painstaking work of two individuals, as all visitors were told, once created, the mandala is destroyed in order to represent the fleeting nature of all human achievement and endeavors. Though paradoxical, I noticed that the power of these symbolic qualities manifested itself in the sense of wonder audiences seemed to feel upon entering the gallery space. There was a sense of reverence for the task, and to the visitors at the gallery, it created an outlet for reflection and pause in the context of both academia and everyday life.

Audiences were also able to appreciate Lama Ngawang’s skill, who because of his training, has the ability to create several types of mandalas purely from memory. Art, especially art that carries such weight, is something that requires extreme devotion, demonstrating in a more general sense that the perfecting of any task demands this same level of focus. It’s an old lesson, but always worth revisiting.

Finally, visitors to the gallery were able to gain new perspective regarding the need for ritual and artistic illustration in modern life. On the morning of March 8th, the day following the main event, the monks hosted a ceremony for the destruction of the mandala. The audiences were in many ways fascinated, and confused by this inevitable and meaningful destruction. Geshe Jampa’s explication provided this sense of higher purpose to the audience. As he explained that this allows for the representation of the everyday cycles of creation and destruction and the understanding that everything in existence is subject to these cycles, audiences related this concept to their own versions of the everyday. Geshe Jampa continued to explain that people are constantly scrambling to create value and meaning within the micro-conflicts of their lives. A lack of attachment to these things is necessary at times.  This was perhaps the most poignant of illustrations, in that audiences were told that this particular mandala is an object of healing, both physically and mentally.

This message was entirely clear to the visitors and participants, as they watched the monks sweep up the sands of the mandala, clearing the original image entirely. Perhaps audience members were able to appreciate the novelty of form, how once a raw material is used for a higher purpose, it becomes blessed for what it was once a part of. The monks handed out small bags of this blessed sand, a memento of positive energy. The remaining sand was taken to the Salt River, in order to spread this positivity and meaning throughout the world.

In the context of academia I can see how the arts are often thought of as a chaotic companion to the well-defined sciences, but the disciplines have the ability to complement each other perfectly. The mandala might be thought of as a visual representation of the analytical side of the humanities, and the need for rationality in describing human thought and spirituality. The mandala conveys compassion, and the necessity of internal reflection, which I find undoubtedly valuable in personal, artistic and scientific contexts.