Bob Beard, Communication and Public Engagement Strategist with ASU's Center for Science and the Imagination

The School for the Future of Innovation in Society joined with ASU’s Center for Science and the Imagination to host a “ScribbleBot” activity on the Night of the Open Door at ASU’s Tempe Campus, February 27, 2016.
(Reposted with permission; originally posted on medium.com) 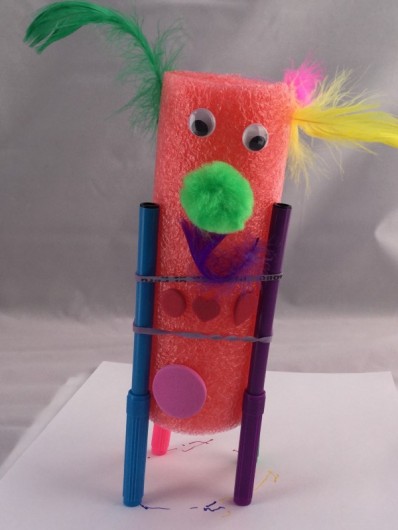 Mary Shelley’s Frankenstein isn’t just a parable about scientific hubris. In an era of Periscope and Anchor, Arduinos and 3D printers, everyone can be a creator. So how we treat our creations — after easily mastering the technology of their birth — is the key challenge of our time.

That’s just one of pressing issues my colleagues and I are investigating at Arizona State University under a grant from the National Science Foundation. It’s a worthwhile line of inquiry, to be sure — one that’s debated and discussed every day in philosophy classes around the world. But how do we train a generation of builders — those Generation Z tinkerers hopped up on Kiwi Crates and coding games — to think carefully about the impact of their creations? Armed with a case of pool noodles, we took a first step in answering these questions at ASU’s Night of the Open Door event.

Night of the Open Door is the university’s annual open house, providing a behind-the-scenes look at research being done on campus. The event features hundreds of hands-on activities, demos, and performances from across a wide spectrum of sciences, engineering, humanities, and the arts — and, as we determined, it was an ideal venue to conduct a little human experimentation.*

Our tent was a boon for arts and crafts-loving kids: tables full of paper, felt, feathers, rubber bands, googly eyes, and pool noodles cut into six-inch segments. Attendees chose a noodle segment, and with the deftness of a competitive Mr. Potato Head-building champion, began customizing their creations with hair, arms, facial expressions, and uncapped markers for legs and feet. 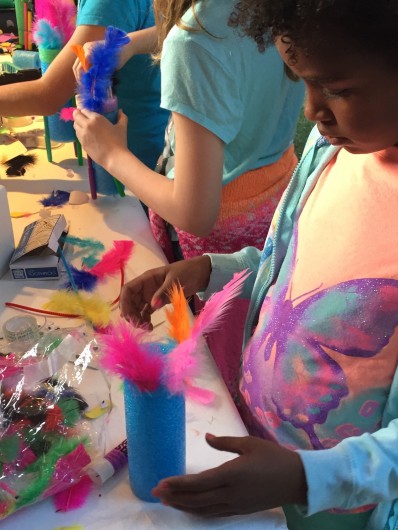 “I collected the instruments of life around me, that I might infuse a spark of being into the lifeless thing that lay at my feet…”
– Victor Frankenstein

Victor used electricity to animate his creature. We opted for battery-powered toothbrushes inserted into the pool noodle body, causing the creatures to skitter about on their felt-tipped legs and scrawl semi-random patterns across a butcher paper table runner.

“As I sat, a train of reflection occurred to me, which led me to consider the effects of what I was now doing….”
– Victor Frankenstein

After the kids had a chance to see their creations in action, we asked them to share their thoughts with us through an informal survey — and this is where it got interesting.

Of the 28 responses we collected (before our test subjects ran off to grab some liquid nitrogen ice cream):

Behold: signs of responsible innovation and empathy for our creations. Maybe Victor should have practiced with some pool noodles instead.

We’d love to hear how this goes for you. Download the instructions to make a scribble creature of your own and let us know the discoveries it prompts for your family or your students.