The Rightful Place of Science: Science on the Verge 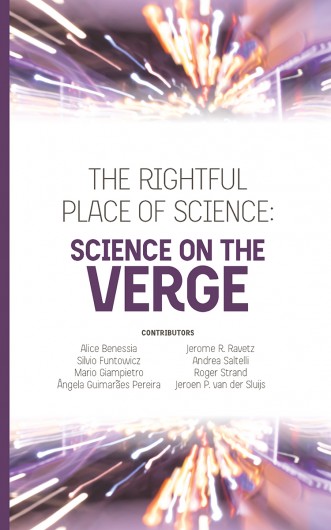 A major crisis looms over the scientific enterprise. Rarely does a day pass without reference to some aspect of this crisis: retractions of research papers, problems with reproducibility, fraudulent peer review, or the manipulated or ineffective use of science for policy. While the implications for society are enormous, the crisis has not been accurately diagnosed or analyzed—until now.

Advance praise for Science on the Verge

“It is time that a book pulls no punches on the inadequate state of science on the verge of collapse. This attack does not aim to knockout with one blow bad practice of contemporary science; it rather circles the issue and delivers body blows until the job is done. […] It starts with the epidemic of retractions and failure across science. It debunks evidence-based science. It goes on to analyze the history of how science got into this mess. Gratuitous mathematization is exposed and stands naked. And finally attitudes to doubt and certainty are laid bare, as contemporary science loses every round, left on the verge of collapse.”

“A major contribution, this book approaches the current crisis of scientific practices with deep insights on the entanglement of science, policy and ethics.”

“This book is about complex issues in science and governance relationships that need clarification. It is a fundamental contribution that should interest scientists, policy makers, practitioners and theoreticians involved in evidence-based decision making. In particular, it deals with the interface between research and policymaking, investigating some important areas where more research and discussions are needed. The book poses key questions and provides some answers. As such, the book is relevant to researchers and policy makers alike.”

“The ‘crisis’ in science is not emergent: it has been brewing at least since WWII, if not since the scientific revolution. And these authors have been pointing to it for nearly half a century, noting that the low quality of so much scientific output results from a ‘structural contradiction’ in how science is conducted, funded and governed, socially, economically and morally. […] Read it and weep. And commit to doing better.”

“It is too easy when we talk about science to get nostalgic, to imagine a republic of independent, moral agents working for what Francis Bacon called ‘the relief of man’s estate’. We need books like this to remind us that 21st century technoscience is big business. […] The litany of controversies, corporate distortions, ethical missteps, retractions, impact factors, league tables and other vices is lengthening. As economies become ‘knowledge economies’ and governments discover new forms of technocracy, we mustn’t pretend that ‘pure’ science is not politicised and marketised. This book offers an uncomfortable but vital diagnosis of the trouble with science.”

“With environmental and social imperatives growing apace and globally structured interests increasingly obscuring the picture, the authors provide an authoritative, inspiring and highly readable vision. In many rigorous but practical ways, they show how science and democracy can be mutually reinforcing—and work more effectively together towards vital solutions.”