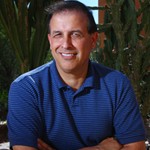 Rick Rodriguez is the Southwest Borderlands Initiative Professor at ASU’s Walter Cronkite School of Journalism and Mass Communication, where he is developing programs for in-depth reporting on Latino and borderland issues. He is the former Executive Editor and Senior Vice President of The Sacramento Bee. During his tenure at The Bee, his staff won many of the country’s most prestigious awards, including the Pulitzer Prize, Robert F. Kennedy Award, and George Polk Award for investigative reporting. Rick was the first Latino to serve as President of the American Society of Newspaper Editors.