Join the National Nanotechnology Coordinated Infrastructure for a unique and immersive experience for scholars to share their research and learn from peers and experts who use diverse approaches to investigate the human and social dimensions of emerging technologies. 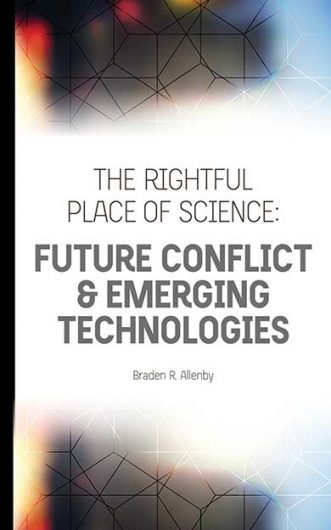 The latest entry in CSPO’s Rightful Place of Science series, the Rightful Place of Science: Future Conflict and Emerging Technologies, was published by Amazon on September 16. As technologies advance at a dizzying rate, the world is becoming more complex, more interconnected, and — in some ways — more dangerous. Such advancements are overturning centuries of combat and security tactics. In this new book by SFIS and CSPO affiliate Brad Allenby explores the shifting dynamics of modern conflict, technology-induced transformations in military strategy, and new factors like cyber warfare and military robots. The book is on sale now, and you can view the entire catalogue of RPS books here

SFIS Associate Professor Michael Bennett, a specialist in policy and legal dimensions of technological innovations and the creative industry, was featured by ASU NOW in a recent Q and A. Bennett was asked to comment on Apple’s new iPhone model, which has been getting buzz because of its lack of a headphone jack. “The erasure of the jack is minor compared with the more muscular cameras that are being introduced,” redirected Bennett.

SFIS Associate Professor Diana Bowman was interviewed by ASU News regarding the “Neurotechnology and Society: Strengthening Responsible Innovation in Brain Science” conference in Washington D.C. Bowman helped to organize the event as a member of the steering committee. Bowman’s fellow faculty member, Andrew Maynard, authored a concurrent article for The Conversation addressing the need for conferences like this one. 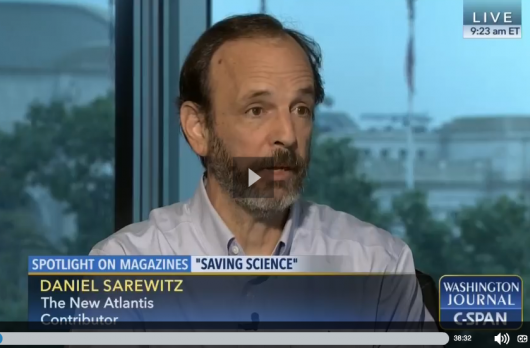 Dan Sarewitz appeared on C-SPAN to discuss his recent wave-making New Atlantis article, “Saving Science.” Sarewitz criticized the emphasis across academia on publishing and bringing in grants over quality in scientific research. 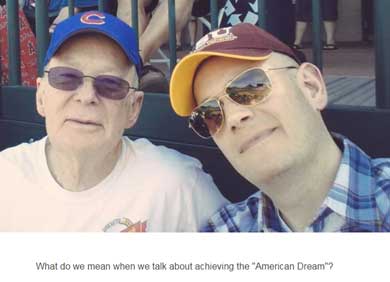 Andrew Maynard, Director of the Risk Innovation Lab, commented in an IEEE Spectrum article about a recent study that claims nanoparticles found inside a human brain over two decades ago came from an external source. Maynard said, “The findings further support the possibility of these particles entering the brain via the olfactory nerve if inhaled,” but he thought that the further claim by the study that there is a causal link between the engineered nanomaterials and neurodegenerative disease was not sufficiently substantiated. 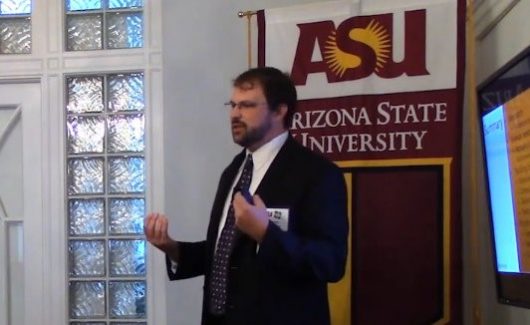 CSPO hosted Eric Hekler, Assistant Professor from ASU’s School of Nutrition and Health Promotion, at ASU Washington Center in D.C., presenting “The Illusion of Average: Implications for Scientists.” Hekler noted “Imagine if, rather than discarded, information on individual and contextual differences were more systematically incorporated into the evidence base. In what ways might research need to change to enable this alternative approach?” This was the first of the 2016 New Tools for Science Policy series and video from the presentation is now available.

In the second of CSPO’s New Tools Policy Breakfast seminar series, Erik Johnston, Director of the Center for Policy Informatics at ASU’s School of Public Affairs, and SFIS Professor of Practice Darlene Cavalier spoke at ASU’s Washington Center. The talk was titled When the Differences Matter: an Open Science Approach in an Age of Individualization. Despite the unflattering track record of “local expertise” resulting from the limits of enabling technologies, Cavalier and Johnston hold that, “when challenges arise, publics equipped with new tools can legitimately participate by studying their circumstances, testing alternatives for improving their communities, and advocating for the actions that best reflect their current values.” 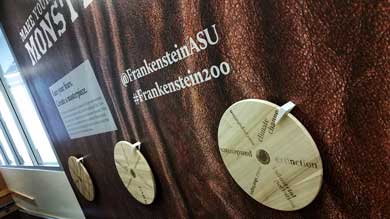 The Frankenstein Bicentennial Project, launched by David Guston and Ed Finn in 2013, examines the scientific and cultural impact of Mary Shelley’s novel through striking original art, interactive collection pieces, and compellingly reflective questions. It now has an installation on display in the exhibition alcove of Hayden Library’s concourse level. The eclectic display will be there to view through December. You can also visit the Project’s webpage to view or read a variety of thought-inspiring content, such as the story of Bobby Zokaites, a Phoenix-based artist who converted a Roomba vacuum to produce paintings. 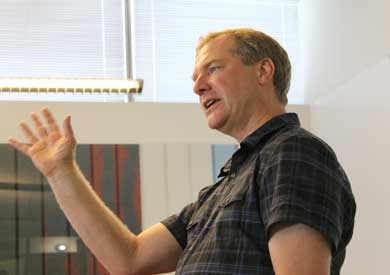 SFIS professor and Risk Innovation Lab director Andrew Maynard spoke at an EnLIGHTeNING Lunch. The talk, titled “Take a Chance on Risk,” involved some “mental base jumping” as Maynard explored the dangers of not thinking differently about risk. By innovating how we think about risk — by framing risk as a threat to values, for instance — risk can powerfully inform responsible innovation and how we go about creating imagined futures. Video of the talk is available here.

SFIS Professor of Practice Darlene Cavalier hosted a Citizen Science meetup inside Hayden Library. The meeting was an opportunity to share new developments, introduce new “members” of the network, and brainstorm for future collaborations in Citizen Science including participatory scientific research, crowdsourcing, and tool/instrument lending. Cavalier is founder of SciStarter and Science Cheerleader. A diverse group of students and researchers, along with facilitators from the library and KJZZ attended the meeting. ASU is ripe for proliferation of citizen science initiatives, especially with the Citizen Science Maker Summit right around the corner in October. Cavalier sees many opportunities at ASU, where so much innovative research takes places, to “make science more visible.”  If you are interested in participating in future meetups contact Darlene Cavalier at [email protected] . 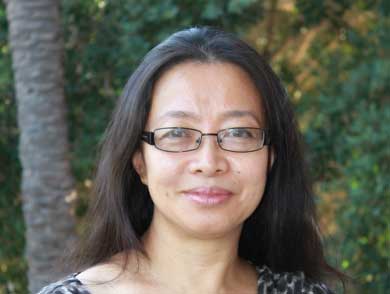 A recent study by SFIS Assistant Director Nalini Chhetri and three colleagues determined that shade is the most important factor contributing to “thermal comfort” in Arizona’s dry climate. This study shows that shade structures — trees, but also man-made — can go a long way toward creating a more comfortable living environment in areas like Phoenix.

Chhetri was also a panelist, along with State Climatologist Nancy Selover, at the Preparedness Symposium organized by the Arizona Department of Emergency and Military Affairs (DEMA) on September 21 in Phoenix. They have been conducting DEMA-funded research on emergency and risk preparedness climate information for hazard mitigation planning. Chhetri and Selover were chosen as experts on extreme climate events and related impacts on the state of Arizona. Over 500 participants representing state and county level agencies ranging from the military to food banks to water resources attended this annual event. Related resources can be found on the symposium website. 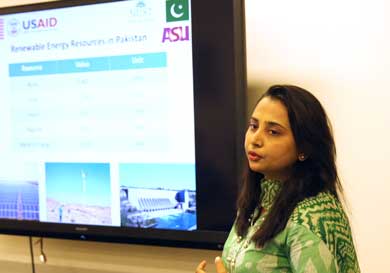 Rabia Liaquat, visiting faculty at SFIS from the National University of Sciences and Technology (NUST) in Islamabad, Pakistan, delivered an Occasional Talk on Energy and Society. Dr. Liaquat’s stay is part of the USAID-funded US-Pakistan Center for Advanced Studies on Energy (UPCASE) project. Her main areas of expertise is bioenergy and biofuels, energy waste, technological design, operation and control of bioreactors. 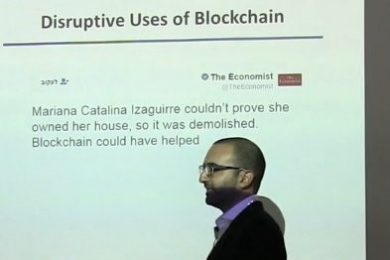 Boaz Yuna, graduate of Zvi Meitar Emerging Technologies program in Tel Aviv, was invited by SFIS to speak on the advantages of block-chain and bit-coin technologies. Video of the lecture is available, and an announcement by Boaz’s home institution is here. 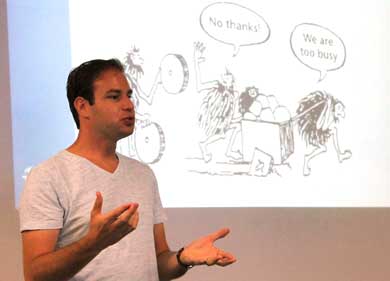 Visiting scholar Dr. Steven Flipse, of Delft University of Technology in the Netherlands, delivered an Occasional Talk this month to share his ideas on interaction design for responsible innovation and sociotechnical research. Flipse’s small but innovative team is very unique at his home institution, which is dominated by technical research and “hard core science” initiatives. For more information and to view video of the talk, follow this link. 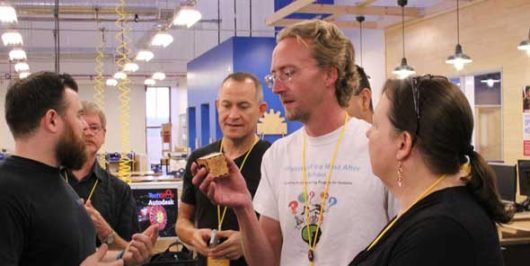 SFIS Distinguished Writer in Residence Lee Gutkind, founder of the magazine Creative Nonfiction and editor of the new essay collection, “Show Me All Your Scars: True Stories of Living With Mental Illness.” Gutkind writes in the book’s introduction that, “more than 50 million people in this country have a diagnosable mental illness, and 15 percent of those can be considered seriously mentally ill.” The book is for sale on Creative Nonfiction’s website now and you can read a detailed review posted by the Pittsburgh Gazette here.

SFIS professor and Risk Innovation Lab Director Andrew Maynard’s new article in Nature, “Is nanotech failing casual learners?” starts with the observation that even after a $1.4 billion investment in nanotechnology research in 2015 alone, “casual learners” still have trouble grasping just what it is and how it might affect them. Maynard was prompted to write this after working with a sixth-grade teacher as part of a National Science Foundation (NSF)-funded Research Experience for Teachers (RET) program. “If the nanotechnology community is to ensure casual learners have access to online information that is engaging, informative, relevant, and trustworthy,” Maynard wrote, ‘we need to do much better.”

In a new article for the Conversation, Andrew Maynard discusses the advent of autonomous or “highly automated” vehicles, published contemporaneously with recently released federal policy for this technology. “Whether it is successful in practice remains to be seen,” wrote Maynard, “But the signs are encouraging. In the meantime, the public health expert in me is excited by the prospect that, through smart policies and innovative technologies, we could one day make crash-related deaths and injuries a thing of the past.”

Andrew Maynard also authored “Considering ethics now before radically new brain technologies get away from us,” an article for The Conversation dealing with the rise in research initiatives in the US and abroad to advance innovative neurotechnologies. “There’s already an active international community of experts addressing “neuroethics,” said Maynard. “Moving forward, the ethical and responsible development of emerging brain technologies will require new thinking, along with considerable investment, in what might go wrong, and how to avoid it.” A few of the possible applications new nano and neurotechnologies might be used for include direct-to-brain code (in lieu of psychoactive substances) and even mind control.

Science Outside the Lab: Helping Graduate Students in Science and Engineering Understand the Complexities of Science Policy, an original article produced by SFIS postdoctoral research associate Michael Bernstein, and faculty members Ira Bennett, and Jameson Wetmore — along with Center for Nanotechnology in Society colleague and CSPO alumna, Keira Reifschneider, was published online by Science and Engineering Ethics.

Use this link to download the brand new and interactive ASU Sun Devil Rewards app. You could win VIP upgrades, exclusive ASU swag, and even tickets by participating in trivia, cool polls, and fun surveys.