The School for the Future of Innovation in Society has launched its own account after borrowing space on CSPO’s Twitter while testing its wings. Come follow us! 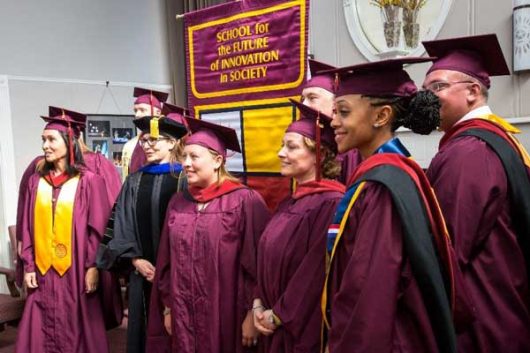 The School for the Future of Innovation in Society is proud to announce its second convocation and the awarding of graduate degrees and certificates to seventeen bright individuals. The ceremony on May 9 featured an address from the guest speaker, Marcy Darnovsky, Executive Director of the Center for Genetics and Society, and a speech by the chosen student representative, David E. Flick II, in addition to words from Director David Guston.

These new alumni shine a light for future SFIS graduates to follow:

Receiving a Master’s Degree in Science and Technology policy was Deron Ash, while Benjamin Wender was granted a certificate in Responsible Innovation in Science, Engineering, and Society. The Master of Science in Global Technology and Development was the largest group, handing degrees to Marina Akins, Megan Buckles, Katie Curiel, Forrest Decker, Pedro Dominguez, David E. Flick II, Tyler Gleason, Cari Lynn Martin, Sara Smith, Sally Jean Swinney, and Carmen D. Watson. Three students walked with MA’s in Applied Ethics and the Professions: Mayra Alejandra Galaz with a concentration in Biomedical and Health Ethics and both Adrianne Gene Curley and Nicholas Longley with concentrations in Science, Technology and Ethics. Heather Ross was the sole recipient of our PhD achievement in Human and Social Dimensions of Science and Technology. Congratulations to this stellar group. We wish them the best in the future—we know it will be better with their contributions.

Additionally, Katie Curiel was the recipient of the Ed Pastor Outstanding Graduate award presented by former U.S. Representative Ed Pastor at the Hispanic Convocation on May 14. Cari Martin and Heather Ross were featured in a series of profiles on exceptional graduates. Both Cari and CSPO affiliate Michael Bernstein were featured in ASU’s video Outstanding Graduate Students – Spring 2016.

Pictures and a full video from the event are available in SFIS’s online gallery plus a short highlights video here. 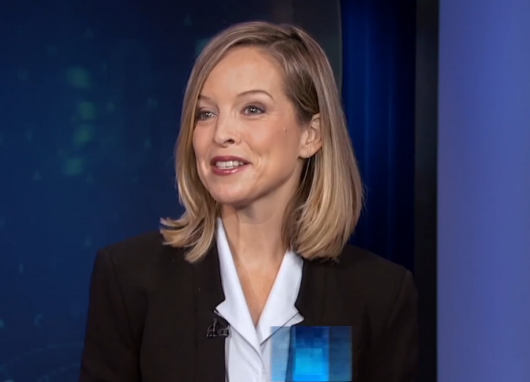 SFIS Professor of Practice Darlene Cavalier has been invited to serve as a member of the U.S. Environmental Protection Agency’s National Advisory Council for Environmental Policy and Technology. The council provides independent advice to the agency’s Administrator on environmental-policy, technological and management issues. Cavalier will represent ASU’s Center for Engagement & Training in Science & Society (CENTSS) and will serve for two years.

Cavalier spoke at the White House Water Summit in March regarding two initiatives she leads: SciStarter and Science Cheerleader. Cavalier also appeared in an interview for Scitechnow, in which she spoke about the great variety of opportunities for citizens to contribute to ongoing scientific projects available through SciStarter. 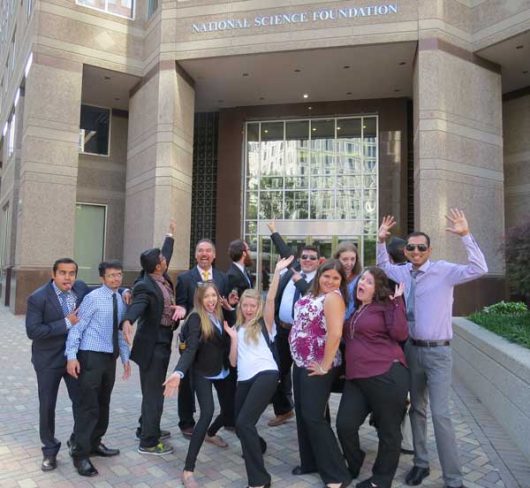 SOtL – The Future of Nanotechnology

A stop at the National Science Foundation was one of many that were a real kick for students attending a week-long Science Outside the Lab (SOtL) immersion program led by Jamey Wetmore in Washington D.C. Sponsored by the Nanotechnology Collaborative Infrastructure Southwest (NCI-SW), this program focused on investigating the context of nanotechnology decision-making in government and business at the local, state, federal, and international levels. Learn more about SOtL. 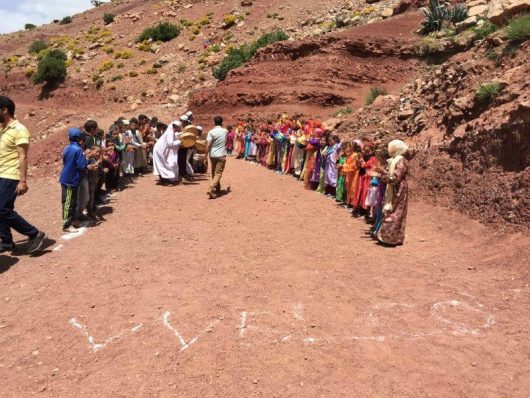 Professor Mary Jane Parmentier and PhD student Carlo Altamirano led a group of 12 graduate and undergraduate students on a Study Abroad experience in Morocco. The theme of the session, “Sustainable Development across Morocco: From National Policies to Local Solutions,” was explored while meeting with government leaders and participating in culturally immersive service activities such as working with local volunteers in a Berber mountain village. The program explored the complexity of sustainable development, from policy to practice, and in particular, sought to identify national priorities and local perspectives. “One theme that emerged for the group was the prioritization and emphasis, locally, on cultural sustainability despite technological change, and the imperative for socioeconomic inclusiveness,” said Parmentier.

Students from the School for the Future of Innovation in Society, the School of Sustainability, Ira A. Fulton Schools of Engineering, W.P. Carey School of Business, and the College of Liberal Arts and Sciences participated.

View photos in the SFIS Gallery 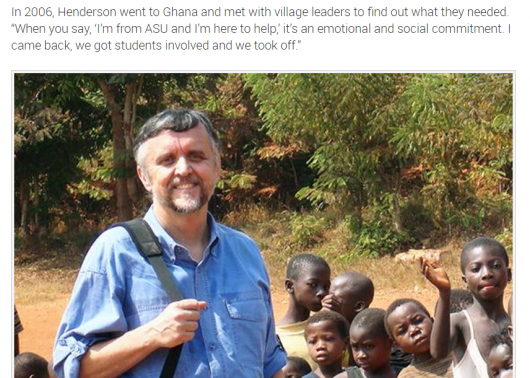 SFIS affiliate Mark Henderson, professor in the Ira A. Fulton Schools of Engineering, was named a President’s Professor for 2016. This distinguished recognition is reserved for professors who combine their passion for teaching with engagement with the larger world in ways that help ASU students become master learners. Henderson is an associate dean at Barrett, the Honors College, and is the co-founder and director of GlobalResolve, a social entrepreneurship program. 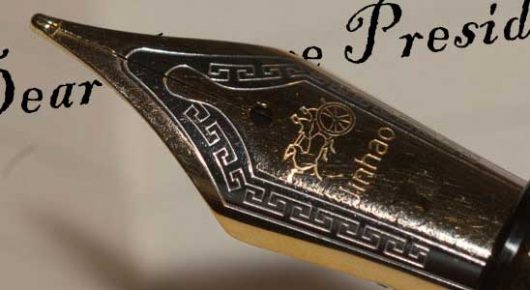 SFIS is delighted to announce that the winner of the $1000 first place prize in the 2016 School for the Future of Innovation in Society Essay contest is Quintin Woods. Quintin is a junior at ASU studying Biomedical Engineering. Quintin’s essay directly addresses the possibility of harnessing innovation to increase equality on campuses nationwide. He explores the innovative idea of developing an app that allows students to earn “equality tokens” that can be redeemed for scholarships. Read more. 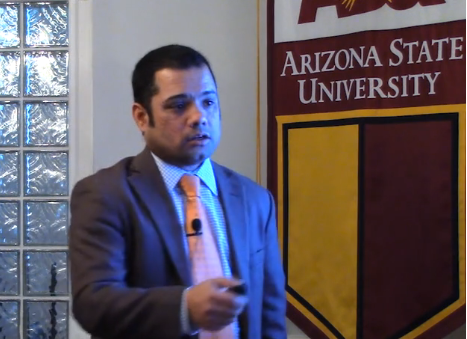 Information systems are fundamentally transforming how we manage public institutions and conduct public policy. Kevin C. Desouza, associate dean for research at ASU’s College of Public Service and Community Solutions and SFIS affiliate, visited the ASU office in Washington, DC, to discuss this transformation—and how the public sector is not keeping up. He noted that the government at all levels spends tens of billions of dollars each year on information technology, yet we still see dismal failures in IT usage, management, and implementation, “government is stymied by outmoded ideas and can do better.” Desouza and his colleague Gregory Dawson have been compiling and studying what they call #IdeasToRetire in a project for the Brookings Institution. Desouza argues that, with a bit of courageous and innovative thinking, the public sector can realize the full potential of IT.

View a video of the presentation in CSPO’s gallery. 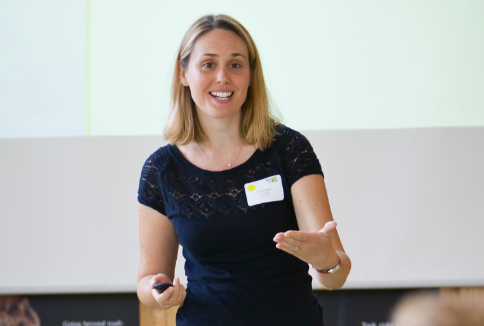 Rae Ostman, Associate Research Professor for SFIS, is Co-Investigator, along with Paul Martin at the Science Museum of Minnesota, for the NASA-funded Space and Earth Informal Science Education (SEISE). The project is developing kits for museums, a small physical exhibit, and professional development to strengthen and supply promising new avenues in STEM education. “Science museums” said Ostman in a January article, “can inspire a new interest in science, which can then be explored in more depth in school or at a library.”

CSPO affiliate Jamie Winterton was interviewed by Mark Brodle on KJZZ on the need for workers in cybersecurity. “Everyone is always playing catchup in cybersecurity because the threat landscape is changing so frequently,” Winterton said. Arguing for the need to broaden the field’s appeal to a more diverse group with multiple specializations, she added “You don’t have to be a serious coder to be in cybersecurity.”

Dave White, SFIS affiliate, commented on Nestle Waters’ planned move to a West Phoenix warehouse in a Desert Sun article. The move has garnered some negative reactions from some who believe the Colorado River is overexploited, though many see the plant as a valuable job provider.

Jason Robert, SFIS affiliate, was quoted in a recent reason.com article on the ethical implications of human-animal chimera research, or growing human organs for transplant in animals. Said Robert, “One of the concerns that a lot of people have is that there’s something sacrosanct about what it means to be human expressed in our DNA.”

SFIS Post-Doc Scholar Hannah Star Rogers will hold the National Park Service Artist in Residence position, as a writer and poet, at the Everglades in Florida through June 2016. Rogers will offer public programs and complete work which will be held by NPS as part of the agency’s art collection. Shortly thereafter, Rogers will take part in a six-week Artist Residency at Djerassi in Woodside, CA, for the 2016 session Scientific Delirium Madness, a collaborative initiative of Leonardo/The International Society for the Arts, Sciences and Technology (ISAST) and Djerassi Resident Artists Program (DRAP). The goal of the project is to explore and expand how the creativity of scientists and artists are connected.

Brian David Johnson, SFIS faculty and resident Futurist, authored the foreword in the City of the Future, a collection of visions of tomorrow’s urban environments provided by some of today’s most gifted science fiction writers. The City of the Future was published by SciFutures, “a technology and innovation house that uses science fiction prototyping to help corporations build their preferred futures.” 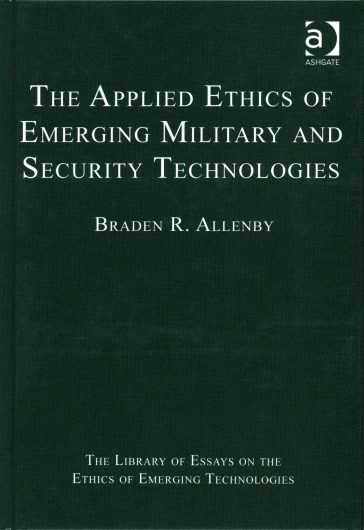 SFIS Affiliate Brad Allenby recently published a new book. The Applied Ethics of Emerging Military and Security Technologies is a multi-author collection of essays dealing with the societal and ethical considerations related to technological advancement. “Challenging and complex technologies,” said Allenby in an interview with ASU Now, “are rapidly changing the world as we know it and a lot of advances in these areas arise directly from our efforts to enhance our military and security capabilities.” 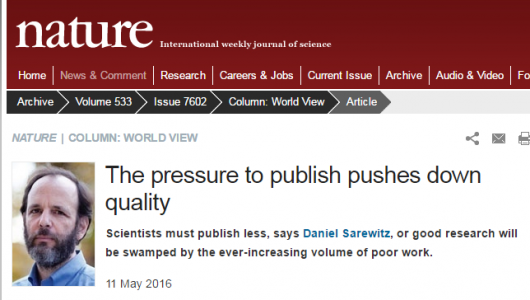 A new Nature article by Dan Sarewitz, SFIS professor and co-director of CSPO, suggests that the pressure to publish in the scientific community has led to a growing body of poor work. “Avoiding this destiny will, in part, require much more selective publication,” wrote Sarewitz. “We can start by publishing less, and less often.” The article was mentioned on genomeweb, along with a brief summary of Sarewitz’s essay.

A new IFLScience.com article by SFIS professor and Risk Innovation Lab director Andrew Maynard describes the promising new ways the emerging field of synthetic biology could fight the spread of diseases like Zika. In “Three Ways Synthetic Biology Could Annihilate Zika And Other Mosquito-Borne Diseases,” Maynard describes techniques which could wipe out mosquitoes locally when an outbreak occurs, prepare rapidly engineered viral RNA and DNA sequences to quickly produce vaccines without need of dangerous or hard to obtain physical samples, and to spread genetic modifications through entire populations of mosquitoes. The field and the techniques are young, but developing fast. 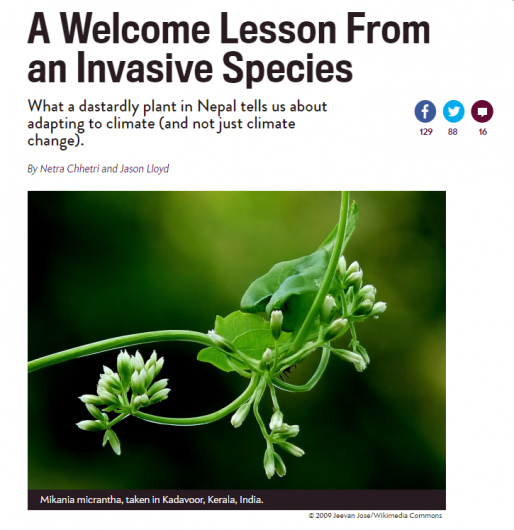 SFIS’s Netra Chhetri and Jason Lloyd collaborated on a new article for Slate concerning the remarkable spread of an invasive plant called mikania micrantha in Nepal’s Chitwan National Park. In “A Welcome Lesson From an Invasive Species,” Chhetri and Lloyd suggest that locals could actually harvest the plant and turn it into biochar, a multi-use product that can fertilize, improve water retention, and filter water. This human adaptation opens the conversation to a broader discussion about how research and innovation could help to make fragile communities less vulnerable to all kinds of hazards, including climatological ones. A truncated version of the article was published on Zocalo. 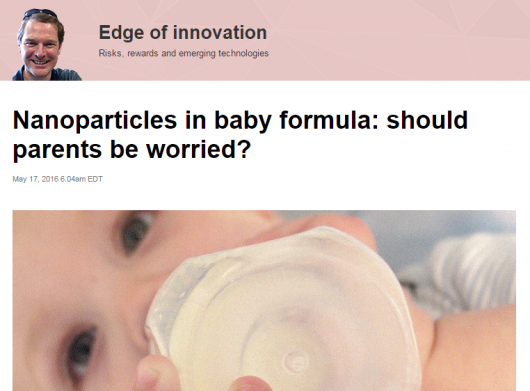 The latest Conversation article by Andrew Maynard, SFIS professor and director of the Risk Innovation Lab, reports the findings of a recent ASU study that found needlelike, nanosized hydroxyapatite particles in instant baby formula. “Luckily, current research suggests hydroxyapatite nanoparticles in formula are most likely safe, and arguably, even beneficial,” wrote Maynard. However, “it does suggest that greater scrutiny and accountability is needed in the supply chain for food ingredients.” 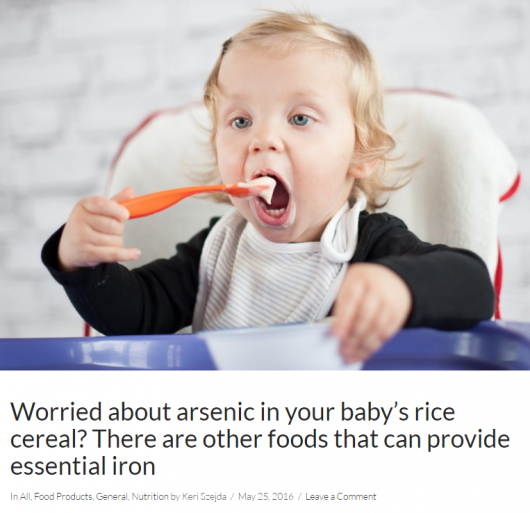 SFIS affiliate Keri Szejda has produced a new ingredients safety article that appeared on CRIS Bits and the Conversation. The article on inorganic arsenic in infant rice cereal draws on FDA findings that inorganic arsenic can lead to lung cancer, adverse pregnancy outcomes, and decreased child development. The FDA proposes an inorganic arsenic limit of 100 parts per billion, a figure only 47% of the currently available cereals tested met. 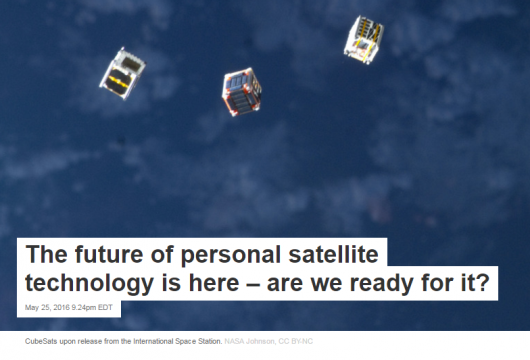 Elizabeth Garbee, an HSD student and Research Assistant for the Risk Innovation Lab, co-wrote an article for the Conversation with the Lab’s director, SFIS professor Andrew Maynard. In the article, Garbee and Maynard consider the rapidly expanding market for CubeSats, satellites small enough to be launched into Low Earth Orbit relatively cheaply. The article looks at the benefits – such as education – and the risks to privacy or through the accumulation of space debris that such technology could herald.