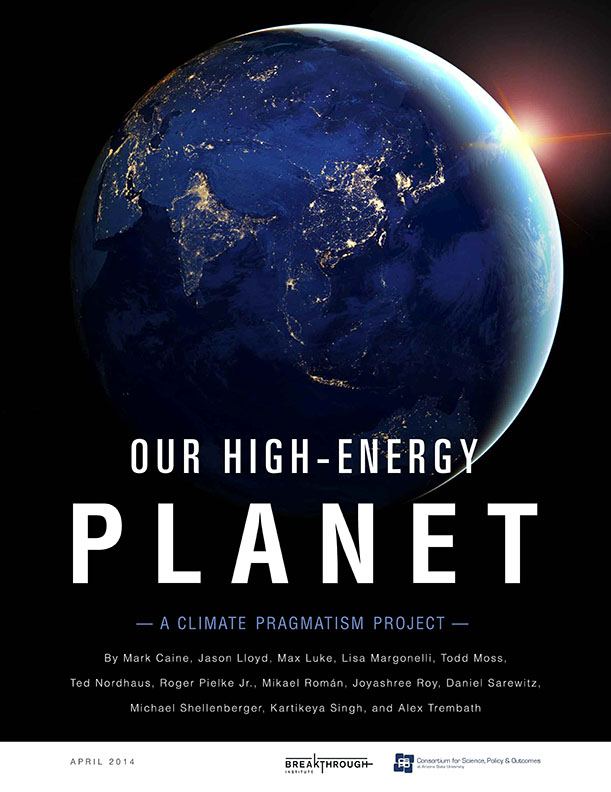 Drastically improved efforts to provide modern energy access to the poor opens up a new approach to development efforts and action on climate change, an international group of energy and environment scholars say in a new report, Our High-Energy Planet. The report is the first of the Climate Pragmatism project, led by Arizona State University’s Consortium for Science, Policy, and Outcomes (CSPO) in partnership with The Breakthrough Institute.

“Climate change can’t be solved on the backs of the world’s poorest people,” said Daniel Sarewitz, a report coauthor and CSPO co-director. “The key to solving for both climate and poverty is helping nations build innovative energy systems that can deliver cheap, clean, and reliable power.”

Given the pivotal relationship between abundant energy access and human development, climate change must be addressed within the context of poor nations gaining access to modern energy. The report criticizes the United Nations, International Energy Agency, and other energy initiatives as too low to drive sustained human development. The UN’s standard for basic access is just enough electricity to power a fan, two light bulbs, and a radio for a few hours a day. Calls for more equitable energy access are gaining traction, with increasing bipartisan support for the Electrify Africa Act, alongside President Obama’s Power Africa initiative to double energy access in sub-Saharan Africa. The massive expansion of energy systems, mainly carried out in rapidly urbanizing developing nations, is the most robust, coherent, and ethical response to the global challenges we face, climate change among them.

Innovation is the key to reducing emissions while expanding energy access. Power sectors are growing at breakneck speed in emerging nations, and their development creates tremendous opportunities for innovation. For instance, in order to reduce energy poverty within their borders, China and India are pioneering the use of advanced nuclear generation and carbon capture and storage (CCS). To continue and accelerate this progress, wealthy nations must support energy sector growth, and provide leadership in their own modernization efforts. America’s longstanding commitment to innovation, for example, has helped drive its move from coal to include nuclear, renewables, and natural gas.

The poverty, inequality, health problems, and environmental degradation that result from a reliance on traditional fuels can be alleviated most effectively through a commitment to truly equitable energy access. Such a commitment, the authors argue, “empowers growth and development using the broadest array of energy services, technologies, and policies that can meet the manifold needs of developing societies.” This provides the foundation for the innovations that will transition the world toward a high-energy, low-carbon future.