The Enola Gay is quite beautiful, in a sort of 1950s-futuristic way:  restored to mint condition, it is all shiny aluminum and glass, sleek and efficient.  It hangs from the ceiling of the branch of the Smithsonian Air and Space Museum out near Dulles Airport in Virginia.  The museum itself is a huge, hangar-like display space housing an immense variety of aircraft and space craft, from balloon baskets to the Concorde to an actual space shuttle. The Enola Gay occupies a central spot in the main display hall, viewable from below and from an elevated walkway, it is clearly meant to be one of the stars of the museum. 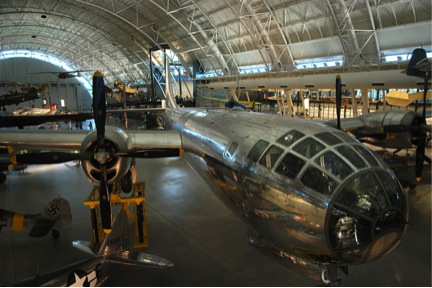 Pretty much everyone knows what the Enola Gay is, and here’s how it’s described on a plaque at the museum:

“Boeing’s B-29 Superfortress was the most sophisticated propeller-driven bomber of World War II and the first bomber to house its crew in pressurized compartments. Although designed to fight in the European theater, the B-29 found its niche on the other side of the globe. In the Pacific, B-29s delivered a variety of aerial weapons: conventional bombs, incendiary bombs, mines, and two nuclear weapons.  On August 6, 1945, this Martin-built B-29-45-MO dropped the first atomic weapon used in combat on Hiroshima, Japan. Three days later, Bockscar (on display at the U.S. Air Force Museum near Dayton, Ohio) dropped a second atomic bomb on Nagasaki, Japan. Enola Gay flew as the advance weather reconnaissance aircraft that day. A third B-29, The Great Artiste, flew as an observation aircraft on both missions.”

The plane’s vital statistics are also indicated on the plaque, for example:

Sometimes the unadorned and objective portrayal of a fact can have great psychological impact.  The Vietnam Memorial on the National Mall in Washington, DC, for example, is nothing but a list of names inscribed on a long marble wall, but the experience of walking past those thousands and thousands of names forces you to face the enormity of warfare’s consequence, to understand one version of war as a massive accumulation of individual tragedies. The Enola Gay display has exactly the opposite effect, perhaps because it is in a museum that is aimed mostly at communicating human adventure and technological achievement. But of course—and this is so obvious it’s ridiculous to have to say it—this plane is not just another example of the amazing progress of aviation, and it’s hard to imagine that any sentient visitor to the museum would interpret it as such.  The absence of any signal that there is more afoot than just an interesting artifact of aviation history is profoundly disorienting in a way that the museum curators surely did not intend.

I described the exhibit to my mother (who, shortly after the war, had briefly befriended the Enola Gay’s radioman), and even she—89 years old and sadly distanced from an ability to articulate subtleties of psychological state—instantly understood why it was more than passing strange to exhibit the Enola Gay without any reference to its meaning.  “That doesn’t seem right,” she said.  Precisely.

The question of whether or not nuking Hiroshima was justified is a tough one, even more so if you try to imagine yourself asking the question in 1945, after the exhaustion of years of all-out, two-front warfare.  Nonetheless, the absence of anything in the Enola Gay display even remotely hinting that the dropping of nuclear weapons was a momentous historical and moral event seems to bespeak a shocking degree of cultural denial, amnesia, or infantilism. Is it possible that after nearly 70 years we as a society—as reflected in our national museums—cannot even publicly acknowledge or discuss the tragic ambiguity of our development and deployment of technologies that in seconds can—and once did—kill hundreds of thousands of people?  If so, it is a sad indictment of our democracy’s incapacity to reflect on its history.