Growing Up Navajo, Near a Mine 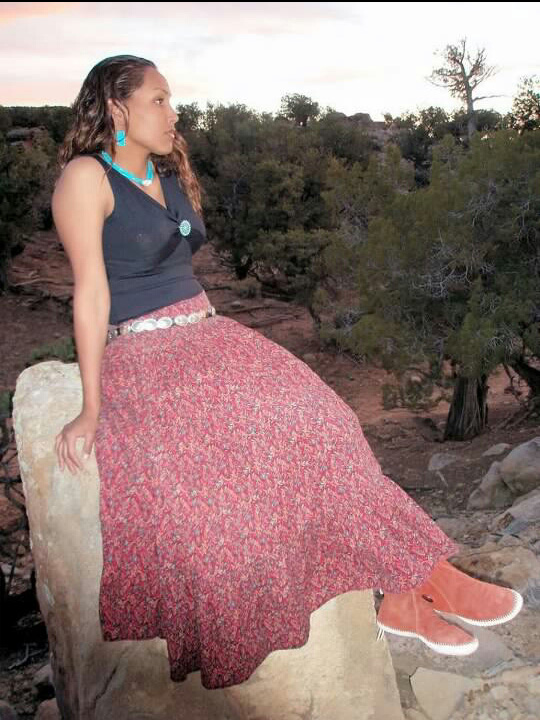 This essay, by an ASU undergraduate, explores the human dimensions of socio-technical systems, and their contradictions, as seen through a single life. The writer, LaTasha Ball, grew up and was educated on the Navajo reservaton in northern Arizona. She is beginning an immersive field project on the intersection of water, power and the Navajo:

Growing up near a mine that provided water and electricity was the norm. Many of my uncles, grandpas and cousins worked in the coal mines. Growing up I didn’t really understand why the mines were there. For all that I knew, they were just digging up coal to burn and use for warmth. I didn’t know the mines were providing electricity and water to non-Navajo people hundreds of miles away, while there were people living literally down the road without running water and electricity.

I used to stay with my grandma a lot when I was a little girl. At night my grandma would light a canteen lantern so we could see after the sun went down. As a child I had to go outside about 100 yards from the house to use the outhouse. Sometimes I would have to go to the outhouse at two in the morning in the cold. There was a lot of hassle associated with not having running water and electricity. At the time it was not a big deal because I knew what to expect when I stayed with my grandma. It was not until I got older that I wondered why my grandma didn’t have running water and electricity when other people did.  Water had to be hauled in barrels on the back of pickup trucks. Ironically, the water was coming from a well that was at the Peabody Coal Mine. The water was used to for daily use. We were not allowed to waste any water because it was such a hassle to get. It was used to drink, bathe, cook and give to the livestock.

We would also go up to the Peabody Coal Mine because we hauled coal in the winter to burn in a stove to keep the house warm. People would take their pickup trucks up to the mines and break and load the coal all by hand. Some people would buy coal from others so they didn’t have to do the labor. Children, grandchildren, and nieces and nephews would get multiple truck loads to take to their parents, grandparents and aunts and uncles.  My other grandma (my mom’s aunt) didn’t have running water all the way up until I was almost out of high school in 2007. She would take showers outside in a homemade shower. There was a barrel next to the outside shower with a hose. The water had to be sucked out of the hose to get the water running like a faucet for the ‘shower’ to work. They had to be quick showers because there had to be water saved for the next person. The water was also pretty cold, so in the winter they had to bathe from a pail inside the trailer.

To this day there are still some people on the reservation who do not have electricity and running water.  Many of the people living without either water or electricity are the more elderly and traditional people. The more traditional elders are motivated to live how they used to when they were children.  It holds a sense of security and comfort; it is based on path dependence. Some of these same traditional people refused to move to home with water and electricity because they preferred to stick to what they were used to. Many people of the reservation probably would not understand but many Navajos are very prideful and at times stubborn. There could be a better method to something they are doing but to them it’s better to do it their way and not have to depend on anybody to do it. Doing it the hard way shows that they are not ‘lazy’ and don’t mind doing the extra work.

As I get closer to my two projects, I hope to learn more about the Uranium mines that many Navajos used to work in. I want to know how many mines there were on the Navajo lands and where they were located. I also want to know if they are planning on opening any uranium mines again. If they plan to open another mine, I want to know how they plan to educate their workers. What type of safety equipment will they need to protect the workers from the toxins? How much will the workers get paid?

I also know that many uranium miners from the past died from cancer. In the places that the mines used to be there are also many people dying from cancer in those areas. I want to know more about when they closed the mines. What are the precautions they took to cover the uranium or did they cover the areas back up? Which mining company was responsible for opening the uranium mines?

From the miners, I would like to know what they were told when they were being hired. How did they first hear about the jobs and with many of them only speaking Navajo, who explained to them what to do? Where they warmed about the toxins in the uranium? If they were warned, did they just not care? What were their thoughts about going to work in the mine? Was it all about the money? What were their motivations for accepting the positions? Are any of the ex-miners experiencing any health complications? Are there any miners that are perfectly healthy?

I hope that I get most if not all of my questions answered. Navajos that work in mines don’t talk too much about their jobs. I hope my interviews help people better understand what the uranium miners had to go through.


The Social Dimensions of Energy Transitions
The social costs of energy transitions
Carbon controls and a solar surge: Are public attitudes changing the game?