How a lack of imagination in technology keeps the world inaccessible to huge numbers of people. 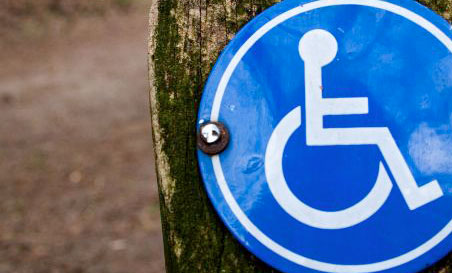 This article is part of Future Tense, a collaboration among Arizona State University, New America, and Slate. At noon on Wednesday, March 4, Future Tense will host an event in Washington, D.C., on technology and the future of disability. For more information and to RSVP, visit the New America website.

Most new employees upgrade their mental faculties when they start jobs, acquiring skills, learning new software and organizational routines, and aligning their behavior with company expectations. But you’ve probably never needed a biophysical upgrade for a new job. Aside from starship pilots in science fiction stories, neural implants are not routinely required for employment; neither is the replacement of a hand with a specially designed prosthetic limb nor the redesign of lungs to enable underwater breathing. Thankfully, willingness to subject one’s body to technological enhancement is not yet the first question asked in a job interview—at least not for most of us.

One group, however, faces constant pressure to upgrade their bodies: the disabled. Think about it—it’s built into the very language of disability. Dis-abled: a body that is less able than or inferior to other bodies. Not surprisingly, as Regan Brashear has documented in her outstanding film Fixed, the most common response is to call for technology to fix disabled bodies. (The March 4 Future Tense event in Washington, D.C., was inspired by Fixed.) Prosthetic limbs, laser eye surgery, even the tummy tuck—all seek to return a seemingly damaged body to normal.

This cultural perspective pits people with disabilities—and perhaps all of us—in a competitive race against those with greater abilities. Twenty-five years ago, when the Americans With Disabilities Act passed, it was supposed to shift this logic. The ADA was not simply a declaration of the rights of people with disabilities, but a profound statement that the problem of disability was not inherent to bodies but rather a result of poor technological design. If people in wheelchairs couldn’t enter a building, it wasn’t because of their bodies’ limitations but rather was the fault of an architect with too narrow an imagination of the building’s potential users.

The ADA has been highly successful in certain respects. Almost all public buildings now have wheelchair entrances. And yet, the problem lies much deeper and runs to a much greater extent than the ADA ever imagined—and it has the potential to impact every one of us, whether or not we have a recognized disability. Rather than designing the world so that a diverse population can function and thrive within it, technology’s patterns force people to design their own bodies to fit in—or those patterns exclude people from participation when they don’t fit.

Consider the U.S. Black Hawk helicopter. Its engineers used conventional standards to construct their design. Those standards required that the design of workstations and equipment in the cockpit fit the bodies of 90 percent of users. In this case, the user population of the Black Hawk comprises Army pilots only, whose body sizes must fit into the existing aircrafts they fly. And here’s the problem: Fitting 90 percent of Army pilots doesn’t necessarily guarantee fitting 90 percent of Army personnel (or 90 percent of the U.S. population). A recent study of the body shapes and sizes of female pilots found that 90 percent could successfully reach all critical controls in the Black Hawk. However, in the general Army population, more than one-third of female soldiers and almost three-quarters of Hispanic female soldiers physically did not have the right size or shape body to fly a Black Hawk. The study did not examine men, but other research on variation among soldiers’ bodies would suggest that some subgroups of men might well also fall significantly outside the necessary range of body shapes and sizes. They could not have flown the Black Hawk if they wanted to. They were disabled by design.

Every technological design—every workstation, piece of safety equipment, computer, building, vehicle, etc.—must first imagine the bodies of its potential users. Yet current engineering design imagination and practice routinely exclude a variety of different kinds of bodies, including but not limited to people with disabilities. Only in a few explicit cases—and for a few specific kinds of bodily disabilities, such as those that require wheelchairs—are the bodies of people with disabilities reliably incorporated into the design imagination.

And the problem only becomes more complex when the relationship between technology and its users is more than simply physical. Technology designs can require cognitive skills as well as physical abilities to achieve optimal performance. A computer interface that presents information textually may fail to communicate effectively, for example, to people who learn visually or spatially or by working with their hands. We are used to thinking of such challenges as capable of being overcome through training, but that perspective may underestimate the scope of the barriers design poses to integration of diverse people into technological systems.

Technologies also do not stand by themselves, isolated from other facets of society. Rather, they are integrated into larger, more complex socio-technical arrangements that distribute their benefits, costs, and risks across different groups. These arrangements can require financial, social, or even political abilities in order to gain access to and use new technologies—as is well-known in problems of energy justice, the digital divide, and fair pricing for pharmaceuticals in poor countries. Human variation in cognitive, financial, and socio-political abilities is, of course, just as wide as in physical abilities. The failure to design for that variability is just as disabling.

No, companies do not yet ask new employees to upgrade their bodies as a matter of course. Yet as Regan Brashear’s interview in Fixed with Gregor Wolbring, a professor, biochemist, bioethicist, and ability activist at the University of Calgary, reminds us, we inhabit a culture that perpetuates the idea that disability lies in bodies rather than in design. Both democracy and capitalism are structured around competition and ability. In democracy, merit replaces birth as the judge of legitimacy, and resources like jobs are supposed to go to those with the highest ability, not those with the wealthiest parents. In capitalism, competition is supposed to enable those who are best able to serve the needs of the market to grow and prosper. Our culture thrives on the push to upgrade performance and enhance productivity. It may not be long before physical as well as cognitive enhancement becomes a routine feature of the world that is coming into being.

But democracy and capitalism are also committed to the logic of the fair playing field. And that is precisely where the design of technology today falls short. Technology powerfully shapes human outcomes. Increasingly, it is clear that these outcomes are unevenly distributed and that technological innovation is at least a contributor to inequality. The very success of technology in upgrading the lives of some has made it even more difficult for others to thrive. Can we do better in the future? Yes, by designing for diversity and ability.

Claire Gordon is a senior research fellow in the Oak Ridge Institute for Science and Education. For 30 years, she was a civilian research scientist for the Army.

Clark Miller is associate director of the Consortium for Science, Policy & Outcomes at Arizona State University.