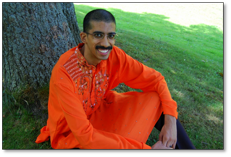 Last week the ASU community lost an incredible thinker and activist, School of Sustainability Ph.D. student Arijit Guha. Arijit passed away March 22nd after what his family describes as a “spirited, graceful, and inspirational bout with cancer.”

Diagnosed with Stage IV colon cancer in 2011, at age 30, Arijit hit the $300,000 lifetime cap on his Aetna student health insurance plan in just one year of chemotherapy and surgical treatments. Well known at ASU for his commitment to identifying and understanding inequity, Arijit turned his analytic and organizational capacities toward advocating for high-quality, affordable healthcare for all. Locally, Arijit worked with ASU’S Graduate and Professional Student Association to influence the Arizona Board of Regents in negotiating an annual maximum benefit of $1 million for students enrolled in the state’s public universities. The Obama Administration’s Affordable Care Act does away with lifetime and annual caps for the majority of insurance plans beginning in 2014 – a huge win for equitable health care advocates nationally.

In part because of a humorous grassroots campaign Arijit and his friends created to raise money to cover his staggering healthcare costs, Poop Strong, Arijit’s story also attracted national attention. He became a prominent voice in the national debate about healthcare, and was interviewed by the New York Times, the Washington Post, and the Chronicle of Higher Education.

By July 2012, the Poop Strong team had been able to raise over $100,000 when Arijit began a Twitter conversation with Aetna CEO Mark T. Bertolini. At the end of what turned into a social media battle, Mr. Bertolini agreed to pay all of his outstanding medical bills. Arijit took to his blog to announce he would donate the money raised through Poop Strong to other cancer patients in need. The note he wrote that day exemplifies the responsibility Arijit has left with our community—to work collectively and tirelessly toward a better world.

“Because of all of you, not only are all my bills going to be paid, but I will be able to donate the over $100,000 we collected since February 15 to other cancer patients in need — people who lack the time and energy and resources and connections to do what I have done. No one should ever have to choose financial stability over health, and no one should have to go through this sort of thing alone. My bills have been paid, but there are many others who are not so lucky, who fall through the cracks of our broken healthcare system. Thanks to the kindness and generosity of untold people, we can help provide a beacon of hope, shine a spotlight on how the status quo is untenable, and hopefully bring about the necessary changes that result in a more compassionate, sane, just, and equitable healthcare system.”

If those reading would like to honor Arijit’s life or learn more about his experiences, visit ‘Ways to Help’ on his blog.

This post was written by ASU graduate students Katelyn Parady and Jennifer Fuller.