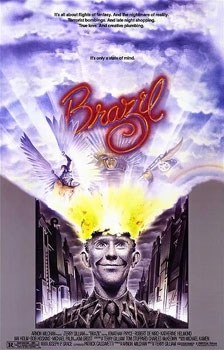 Arizona State University President Michael Crow and Dan Sarewitz, Co-Director of ASU’s Consortium for Science, Policy & Outcomes, hosted a free screening of director Terry Gilliam’s cult classic Brazil. Held at the Landmark E Street Cinema in downtown Washington, DC, the screening was part of the Future Tense “My Favorite Movie” series, in which leading thinkers on emerging technologies and society share a favorite film that provides a thought-provoking vision of the future. After the film, Crow and Sarewitz led a fascinating discussion about the movie and its connections to contemporary issues in politics and technology.

A dystopian future of endless bureaucracy and increasingly decrepit technology, Brazil can be seen as Gilliam’s critique of Margaret Thatcher’s Britain, a society at the vanguard of neoliberal policies and tormented by the Irish Republican Army’s deadly bombing campaigns. Released in 1985, the movie updated many of George Orwell’s themes from his classic dystopia 1984. Rather than a “boot stamping on a human face—forever,” Brazil imagined a society controlled by a vast, blundering bureaucracy and a security apparatus that requested signatures on the appropriate rendition forms so that torture victims might be properly billed for their interrogation. Horrific acts become desensitized through paperwork, and rules have no purpose other than to perpetuate their own existence. Visionary, bleak, and very funny, The Guardian described Brazil as “Monty Python meets George Orwell.”

Crow and Sarewitz’s discussion with the audience following the screening connected the film’s themes to a broad spectrum of challenging issues. Like other dystopian visions from the Cold War, the state is the controlling entity in the movie, and government surveillance remains controversial today. In both the film and in current American politics, fear of terrorism drives this erosion of privacy. However, today many people freely give much more information to Silicon Valley corporations than any authoritarian regime has ever had access to. This reflects our deep ambivalence about the concept of privacy, and it underscores how advancing digital technology can be a double-edged sword when it comes to democratic freedoms. Social media platforms like Twitter, for instance, can be used as a means of populist empowerment to organize protests; on the other hand, they can be used to target dissidents and shut down nascent reform movements.

Could the social and political consequences of these technologies lead to the vision of society put forth brilliantly in Brazil, only with the film’s invasive ductwork—snaking through even the most luxurious apartments—residing in our smartphones instead of our living rooms? Like those ducts, Brazil works its way into debates on a host of contemporary issues.